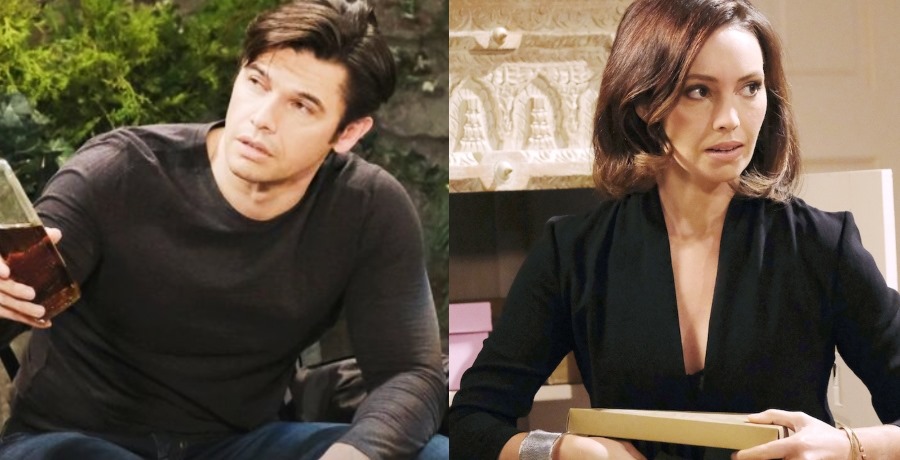 Days of Our Lives spoilers for the next two weeks, beginning Monday, April 5, through Friday, April 16, show Gwen Rizczech (Emily O’Brien) has some news for her sister, Abigail Deveraux (Marci Miller), and her brother-in-law, Chad DiMera (Billy Flynn).

Plus. Xander Cook (Paul Telfer) continues to numb his pain with alcohol on the NBC soap.

Days of Our Lives Spoilers: Ben Weston Desperate To Get Ciara Brady Back

Days of Our Lives spoilers show Ben Weston (Robert Scott Wilson) is distraught over his wife Ciara Brady’s (Victoria Konefal) inability to remember him as her husband. Sadly all she sees when she looks at Ben is the Necktie Killer, not the man she fell in love with. Of course, there’s nothing Ben wants more than to have his wife remember their love and life together.

According to Days of Our Lives spoilers, Ben convinces Dr. Marlena Evans (Deidre Hall) to see if Ciara’s willing to try hypnosis to regain the last few years of her life. Ciara agrees; however, DOOL spoilers suggest Ben pushes Ciara too far. Now his hopes for a reunion are once again derailed.

In the latest #DAYS, Marlena makes an offer to Ciara. https://t.co/ZsCmioRrzb pic.twitter.com/DH6JoSu8pM

DOOL Spoilers: John Black Wants To Fill In The Blanks

Days of Our Lives spoilers remind John Black (Drake Hoegestyn) cannot account for a few hours the night Charlie Dale (Mike Manning) was murdered. John did threaten Charlie the night he was ultimately killed. Most of Salem wanted to see Charlie dead. Now John finally admits to his wife, Marlena he heard gunshots before he blacked out the night of the murder. However, he’s not sure if he fired the shots, saw the shooter, or just heard the aftermath of the crime.

Days of Our Lives spoilers say John asks Marlena to hypnotize him to remember what happened that night. Marlena’s in high demand these next few weeks between Ciara and John, both seeking answers while under hypnosis. However, Marlena is also very concerned if Jan Spears (Heather Lindell) will pursue attempted murder charges against John now that she’s awakened from her coma.

Days of Our Lives Spoilers: Xander Cook Self Soothes With Booze

Xander Cook has found comfort with alcohol since his fiance, Sarah Horton (Linsey Godfrey) abruptly dumped him hours before their wedding. Of course, we all know that it was Kristen DiMera (Stacy Haiduk) wearing a “Sarah” mask that broke Xander’s heart.

Days of Our Lives spoilers recall Xander got sloppy drunk at The Brady Pub. While there, he exchanged barbs with Gabi Hernandez (Camila Banus)) and Philip Kiriakis (Jay Kenneth Johnson). He also decked Philip causing Roman Brady (Josh Taylor) to toss him out. Now Xander gets drunk again and pulls similar antics at Julie’s Place.

Plus, other DOOL spoilers show Xander offering newcomer Chanel Price (Precious Way) some of his booze when she stumbles upon him at the park. Soon Xander wakes up with a nasty hangover and no memory of what transpired. Did Xander and Chanel hook up? Anything is possible with the newest schemer in Salem.

Days of Our Lives spoilers know Jack Deveraux (Matthew Ashford) wants his two daughters to make peace and bury the hatchet. That’s a tall order since these two have a violent and sordid past of vengeance against each other.

Now Gwen’s doing her best to make amends to her little sister. So she offers an apology to Chad DiMera. Perhaps Gwen feels remorse over their one-night stand. Or maybe Gwen admits they never actually slept together. Honesty isn’t Gwen’s strong suit, and neither are apologies.

However, whatever Gwen shares when making this apology doesn’t sit well with her sister Abby. Days of Our Lives spoilers tease that Gwen’s latest news flash does more harm than good with repairing her relationship with Abby on the NBC soap.

‘RHONJ’: Melissa and Joe Gorga Still Love Each Other Despite Problems
‘The Bold And The Beautiful’ Spoilers: Bill Goes To Desperate Measures
Jackson Roloff & Lilah Brighten Up Already Beautiful Scenery
‘Bringing Up Bates’ Season 10 Teaser Reveals ‘A Lot Has Happened’
Even Radically Kind Candace Cameron Bure Gets Grumpy Too