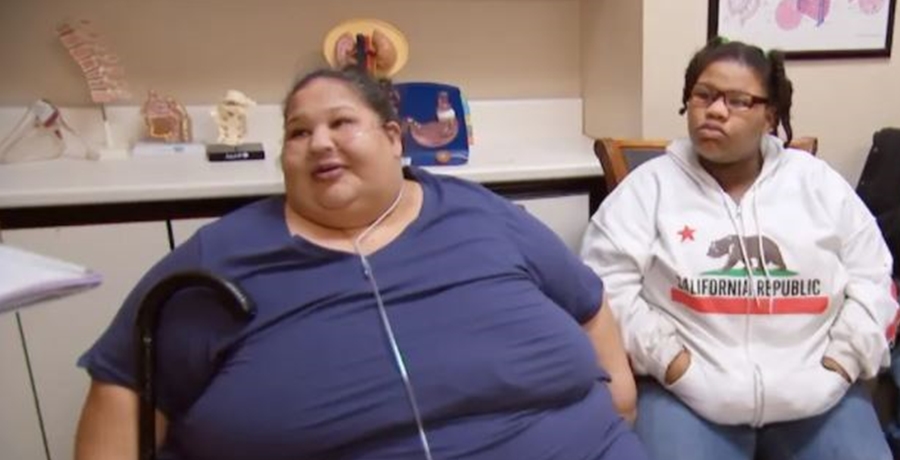 My 600-LB Life came with a teaser ahead of Chrystal Rollins’ episode on TLC. In the episode, fans saw that she struggled to meet her target weight set by Dr. Now. As a child, she developed a food addiction and she found comfort when her single mom came home from work as they ate together. Later molested by a stepfather, she continued looking for food to comfort herself. So, did she finally qualify for her weight loss surgery? Are there any new updates? Read on to find out.

We reported that when the teaser clips dropped, Chrystal really hurt herself. She and her teenage kids booked into a hotel hoping for a first-floor room. However, they ended up in a room upstairs. When she tried getting into the elevator, she fell and hurt herself. So, it seemed like an inauspicious start to her visit to see Dr. Now. It doesn’t help that she relies on oxygen as she comes with a multitude of health issues. And, she feels like a burden because her girls literally have to do everything for her.

Naturally, a lot of My 600-LB Life fans wondered if Chrysal ever qualified for her surgery. Especially with her health issues. In the episode, Distratcify noted that Chrystal’s problems include “high blood pressure,” “congestive heart failure,” and swollen legs that sometimes “leak water.” Naturally, unless she loses a lot of weight, Dr. Now worries that she might not actually survive anesthesia. So, he won’t risk it until she loses enough weight to get by without her supplementary oxygen.

Did she lose weight and undergo gastric surgery?

Given Dr. Now’s exercise and food plan, The My 600-LB Life star also saw a psychotherapist named Matthew Paradise Unfortunately, she lost only nine pounds. So, he sent her away with a target weight loss of 60 pounds in two months. Finally, she persuaded him to grant her an extension. Then, asked her to try for 90 pounds over three months. That’s where fans see her try really hard and still fail. The next time she saw the doctor she weighed in 38 pounds less. While Dr. Now appreciated her efforts, she still needed more weight off.

The only way forward that doctor on My 600-LB Life could envisage included a stay in hospital with a very controlled diet. Either that, or Chrystal should try and lose 60 pounds in another two months. Finally, after eight long months, she weighed in at 498 pounds which meant she lost 114 pounds. Excited, she thought her surgery might come along soon. However, the doctor still felt worried about her reliance on oxygen. So, he expected that continued weight loss over up five months might do the trick. Did she meet her goals and get her gastric surgery?

The question about gastric surgery remained unanswered on the show

As the episode ended with Chrystal hoping that she could get off the oxygen within three months, fans never saw her go for surgery. So, did she finally achieve her dream? According to The Cinemaholic, Chrystal Rollins’ Facebook indicates that she “no longer needs supplemental oxygen.” However, Distractfy noticed that she posted nothing about her continued weight loss journey. And, there’s no indication whether she ever went for her surgery.

While the oxygen tubes don’t feature in the December 2020 photo that the My 600-Lb Life star posted, it’s not all that clear whether she lost much more weight.

With no further updates from Chrystal, for now, fans just need to hope for a Where Are They Now? episode from TLC.

Are Jinger & Jeremy Vuolo Really Leaving LA? Jinger Addresses Rumors
Josie Bates & Kelton Balka Did WHAT Before They Got Married?
‘Return to Amish’ Sabrina & Jethro Have Special Family Moment
Olivia Plath Opens Up About Family Conflict: ‘I Did Everything I Could’
‘Sister Wives’ Janelle Brown Has ‘One Of Those’ Days