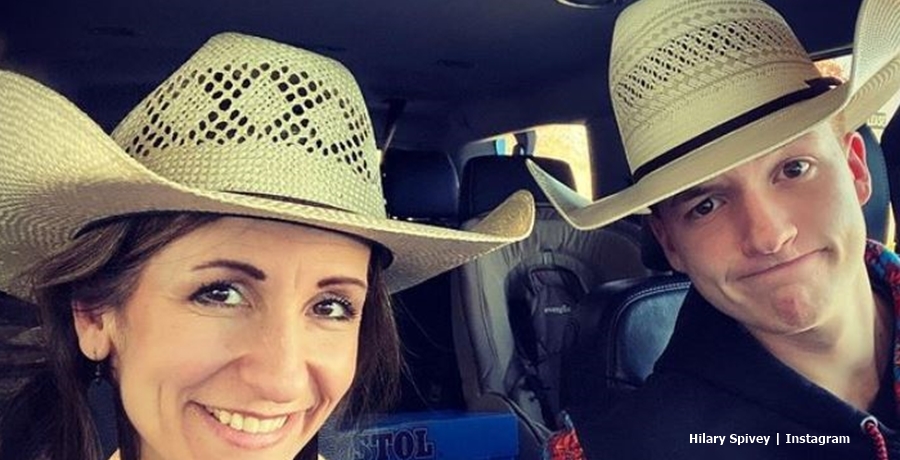 Justin Duggar married Claire Spivey with a ceremony down in Texas. Later, photos emerged of the grand event. A teaser came out about the function. Now, more photos surfaced. One photo showed a guest at the wedding wearing a cowboy hat. One Duggar follower seemed really angry about it. They accused the whole Counting On family of trying way too hard to be Texan.

When Justin married Claire, the whole extended family made their way their way there. Some of them stayed over. That included Michelle and Jim Bob, according to Claire’s mom, Hilary Spivey. Meanwhile, Jill and Derick Dillard attended, but they didn’t stay.

While fans mocked Derick for wearing his hair in a man bun. He didn’t wear a cowboy hat. No other photos from the wedding revealed any of the Duggar family wearing one either. Mind you, Jim Bob’s been spotted wearing one occasionally in the past.

We reported about the wedding photos and later, about a teaser for Justin Duggar and Claire’s wedding by Gabenator Films on YouTube. In none of them could Counting On fans see anyone wearing a cowboy hat.

However, someone did. And that worked up a critic on Instagram into a fury of insults. Certainly, a new photo shared by Katie Joy of Without A Crystal Ball triggered the Texan who slammed the person for wearing a cowboy hat.

Actually, it’s not certain why the critic slammed the entire Duggar clan for the one guy who rocked a cowboy hat. Maybe, they just felt a bit tired. After all, at the end of the rant, the angry fan mentioned their cows and how it was “late.”

Family slammed, looks ridiculous for trying hard to be Texan

The Counting On critic slammed the guests at Justin Duggar and Claire’s wedding. In Katie Joy’s caption, she wrote, “New photo found of Justin Duggar’s wedding. In the left corner, Terry Forsyth is seen – I guess Austin’s family made the trip to the ‘small wedding.” Well, between the Duggar family, Claire’s family, and all their friends, it seems the wedding was anything but small. A few fans talked about social distancing and the coronavirus.

However, in a long rant that included the state of the neighbor’s bull, her own cows, and cat, the critic slammed the entire family at Justin Duggar’s wedding. Apart from rambling on about shopping with a mask in Texas, they said, “They all look extremely stupid with cowboy hats.”

Well, it’s not as if everyone wore a cowboy hat. Nevertheless, the critic continued by saying, “I have never in my life seen them in a cowboy hat before, just because you’re in Texas doesn’t mean you wear a cowboy hat.”

Protocols for wearing a cowboy at Justin Duggars & Claire’s wedding

The angry critic continued the rant by suggesting the family learns about the protocols for hat-wearing in Texas. They noted, “Not every Texan wears cowboy hats, rides horses and owns drilling rigs…They also need to know when it is straw hat and when it is felt hat season.”

Finally, they wrote, “The groom and his party could get away with it, but the others should be wearing straw hats by now. I live in Texas.”

Well, presumably the entire family who attended Justin Duggar and Claire’s wedding doesn’t care about the backlash. It is possible they didn’t even see what the critic wrote. After all, it’s unlikely that they read every post that Without a Crystal Ball posts up on her Instagram. And, possibly, the cowboy hat-wearer was a member of Hilary Spivey’s family.

If you look at our featured photo at the top of this article,  you can see a photo posted by her about her “Little dude.” If that’s the case, seeing they also live in Texas, perhaps that rant was a bit unfair. Do you agree? Sound off in the comments below.