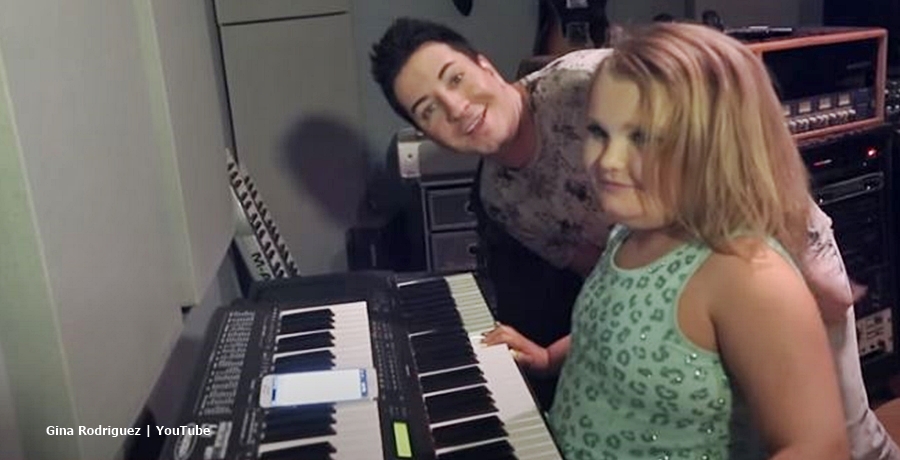 Honey Boo Boo, Pumpkin, and her mom Mama June produced a song/video in 2015 in collab with Adam Barta. Now the young teen took to her Instagram and advertised that she sells it off. It certainly looks like the WEtv star hopes for a nice return on the song and opted for cryptocurrency payment. It’s not clear who the profits goes to as the Movin’ On Up song/video is actually owned by Gitoni inc.

We reminded fans that Mama June Shannon appeared in the video in 2015. So, if you wonder why she stayed and trained with Adam Barta in Florida after rehab, that’s one big connection. Movin’ On Up by Alana Thompson aka Honey Boo Boo featured the video artist Adam Barta. It also featured her sister Lauryn Shannon aka Pumpkin. If you love him, the song might interest you as Sugar Bear also appeared in it. You can see a short clip further down, which Gina Rodrigues shared in September 2015.

On Wednesday, March 17, Honey Boo Boo took to her Instagram and told her fans she sells the song. She captioned it with, “BIG NEWS!! I’ve decided to sell my one and only song and music video as an NFT!!” Well, if you don’t know, NFT is a cryptocurrency system “where artists are paid fairly,” according to Rolling Stone. It means that “the secondary ticketing market is no longer ravaged by scalpers.” And with the current boom in crypto prices, if it sells, it might make a tidy profit.

Where can you buy Movin’ On Up?

The song featuring Honey Boo Boo is available on Rarible. The site offers bid or buy options. So far, nobody bid on it. Gitoni inc posted the sale and their asking price means you need deep pockets. ETH (Ethereum) blockchain currency currently trades at one ETH to $1,841.4751 to $1. The asking price of just over 84 ETH translates to $153,844.18. And that probably cuts out most of her fans on Instagram. Nevertheless, her fans wished her good luck with the sale of Movin On Up. One said, “You go girl I hope you get millions 😍.”

With Mama June Road to Redemption premiering on Friday, March 19, at 9 p.m. on WE tv, this seems like an opportune time for Honey Boo Boo to advertise the song/video. Interest in the show naturally runs high. In the upcoming season, fans see June Shannon return to her family after her stint in rehab. Recall, in Family Crisis, she admitted that she and Geno threw nearly $3,000 per day away on their crack cocaine habit.

What are your thoughts on Honey Boo Boo advertising her song/video, Movin on Up for over $150k? Do you like it? Sound off in the comments below.