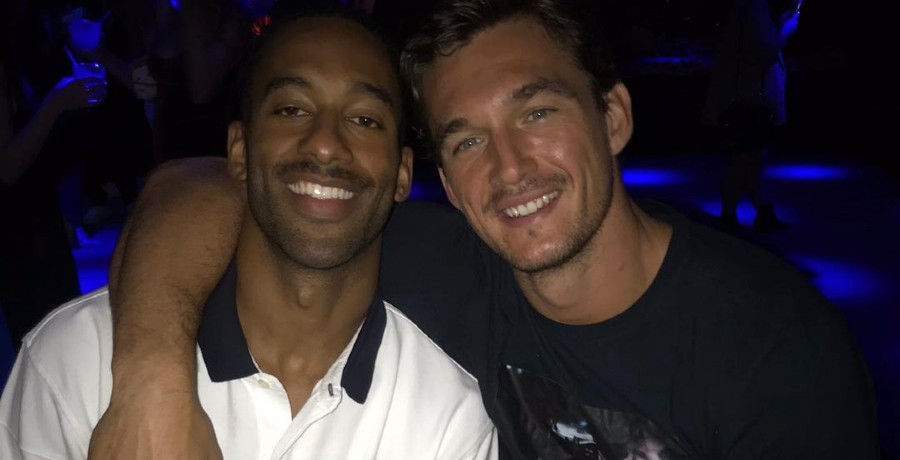 Throughout the controversy surrounding Season 25, one Bachelor Nation alum has been unusually quiet. Tyler Cameron is best friends with Matt James. The long-time buds even share an apartment in NYC. In fact, Tyler’s mom is the one who nominated Matt James for The Bachelor.

Tyler Cameron made a brief appearance on Season 25 when Matt James and Katie Thurston pranked the former Bachelorette suitor. But Tyler Cameron has otherwise been in the shadows during the controversy that’s engulfed Bachelor Nation.

He finally broke his silence by giving an update about how Matt James is dealing with the aftermath.

Matt James Heartbroken at After the Final Rose

Matt James isn’t a man of many words. At least not during his time on The Bachelor. But during his confrontation with Rachael Kirkconnell at the After the Final Rose, he was completely shell-shocked.

Host Emmanuel Acho tried to gently nudge answers out of Matt James, only to be met with pained silence. Matt James just couldn’t find the words to express his hurt and disappointment in his final rose recipient.

At the end of The Bachelor, Matt and Rachael rode off into the sunset, destined for happiness. Then the wheels came off when Rachael’s racially insensitive behavior came to light.

As he explained during ATFR, Matt didn’t want to believe the things he was seeing “floating” around social media. However, when the reality set in that the photos and ‘likes’ were real, Matt James ended the relationship.

Tyler Cameron may have remained mum about the scandal publicly, but privately, he has Matt James’ back. The model spoke to Us Weekly the day after The Bachelor finale aired. He was promoting his partnership with Optimum Nutrition. The conversation veered to how Matt James is coping with the breakup.

While Matt James is definitely “going through it,” he has Tyler Cameron to lean on. Tyler told the outlet that he’s “always a sounding board.”

Overall, Tyler Cameron thinks appearing on the reality show was “a great learning experience” for his friend.

Typically, the end goal of The Bachelor is to fall in love and get engaged. Matt James fell in love with Rachael Kirkconnell, but he wasn’t ready for marriage. Before making his final choice, Matt James had a difficult talk with his mom about how love fades.

After a very messy split, does Matt James still believe in love? Tyler Cameron thinks so. Additionally, Tyler believes that his friend will find love again.

Fans didn’t like that Matt James wouldn’t commit to either of his final two women. A lot of fans suggested that both Matt and his mom need therapy. Well, Matt James saw those memes and got the message.

A day after the finale, he jokingly tweeted that he was Googling therapists.

Do you agree that Matt James has commitment issues? Share your thoughts on the finale in the comment section. Or join us on Facebook to connect with other Bachelor Nation fans.

Katie Thurston’s season of The Bachelorette will reportedly begin filming this week. Follow us on Twitter for updates on all your favorite TV shows.