1000-Lb. Sisters Season 2, Episode 9 left fans feeling a little out of whack after seeing how Tammy Slaton reacted to Amy Halterman showing off her baby boy Gage. Fans expected Tammy to be through the roof excited to see the newest addition to the family. They expected her to be happy for her sister. But, she had a lackluster response. And, fans were disappointed. Moreover, some insisted Jerry had a better reaction to baby Gage.

Is Tammy Slaton just jealous of the situation?

Some 1000-Lb. Sisters fans worry this was a toxic situation filled with jealousy. Was Tammy jealous Amy got to lose weight and have a baby with her husband? Was Tammy jealous Gage would become the center of attention for the family? And, was she jealous that Amy and Michael would no longer be able to help her because Gage would come first? Many fans have grown tired of the not so affectionate pet name the sisters have for each other (b*tch). And, they just really didn’t care for Tammy’s lack of joy when she saw her nephew for the first time.

Jealous of Amy’s baby gage? The truth spilled on TikTok

If you don’t follow Tammy Slaton on TikTok… You are probably missing out. Tammy reveals a pretty significant amount of information on that streaming service. Some of it is in the videos she posts. And, some of it is in the way she communicates with her followers in the comments. If you are observant, you can learn a lot of things you may have not learned from the show.

Turns out, someone commented in all capitalized letters asking Tammy if she was mad at Amy for having Gage. Tammy decided to respond to the comment because she’s been catching some serious heat for how she reacted to the baby. 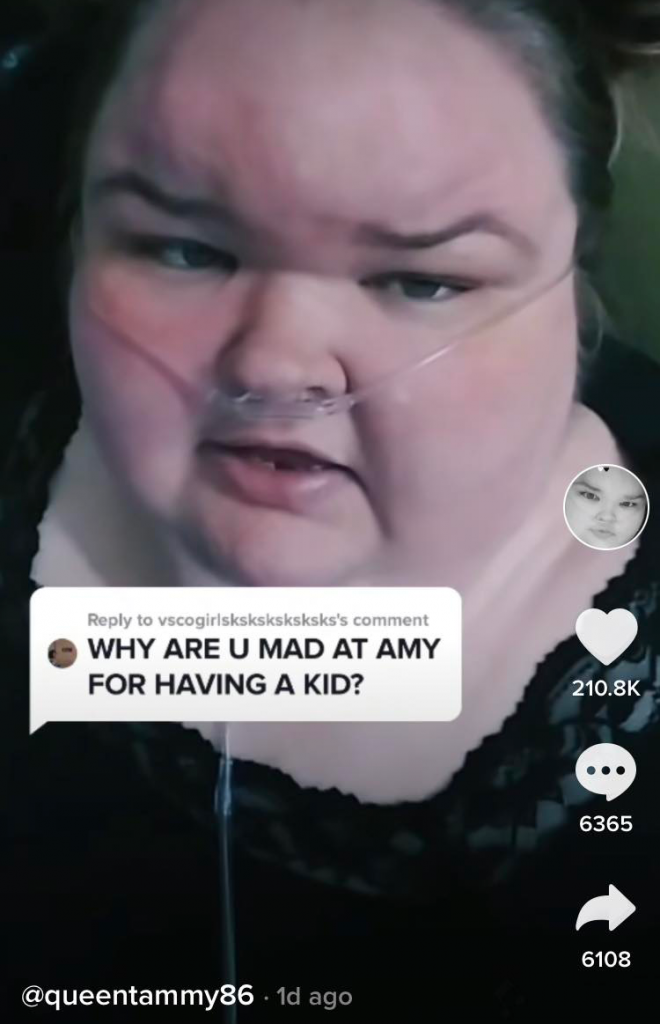 Tammy Slaton quick to shut down the question

Initially, Tammy Slaton questions what reason she would have for being mad that her sister had a baby. She insists she’s happy for her sister. After all, this is something Amy has wanted for a long time. But, 1000-Lb. Sisters are forgetting one simple thing. Tammy Slaton tested positive for COVID just days after Amy gave birth. Tammy admits she already wasn’t feeling well when Amy called to show off the baby.

So, her lackluster reaction wasn’t out of jealously or anger. This was just someone who really didn’t feel good. Someone who had COVID-19 and just didn’t realize it yet.

In the comments, fans appreciated the TLC queen popping off at her haters. Likewise, they hoped people would back off as she didn’t need to explain herself to anyone. Do you agree that Tammy had a lackluster reaction to the baby? Does the lack of a happy response make more sense knowing she had COVID-19 at the time? Share your thoughts with us and keep coming back for the latest 1000-Lb. Sisters news.

Maddie Brown Brush Gets Relatable About Cooking & Groceries
Ben & Jessa Seewald Reveal Baby’s Name, But What Does It Mean?
Adam & Danielle Busby DRAGGED For Getting ANOTHER Designer Dog
Whitney Way Thore Tired, Exhausted, & Annoyed By It All
Lauren Luyendyk Hospitalized Weeks After Giving Birth To Twins