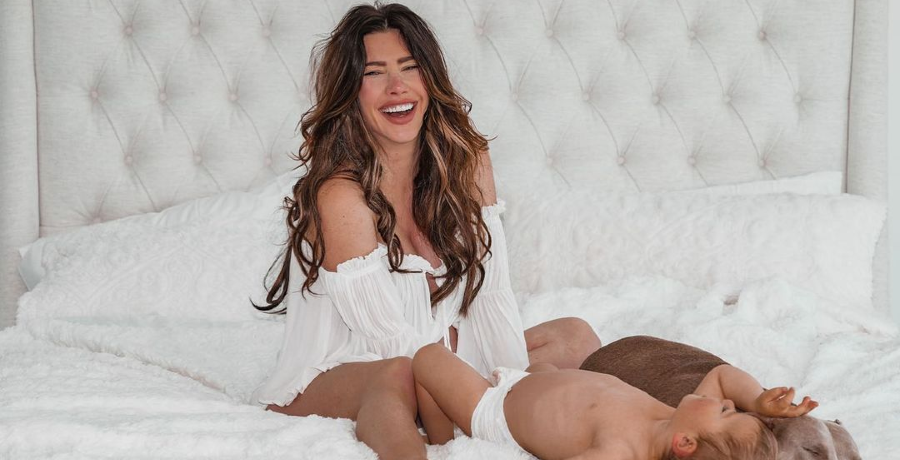 Jacqueline welcomed him into the world in 2019. Since then, she’s been wanting to become a mom for the second time. She took to Instagram to share a photo of her little one bundled up in white. He looks angelic in the photo seen below. Jacqueline didn’t keep the baby’s gender or name a secret on social media.

Bold and Beautiful fans had a feeling she was in labor

Earlier this month, Jacqueline had a gender reveal. She let it all out in a previous Instagram post that read: “Annnndddd the category IS……Gender Reveal Extravaganza.” She did the reveal while dancing to “I’m Coming Out” by Diana Ross. Bold and Beautiful fans know how loud and colorful the actress is. So, she had to do it while dancing around in pink and blue wigs. The last scene showed her wearing a blue wig. Also, she took out a blue fan and danced while “It’s a Boy” flashed on the screen.

The model also shared baby updates via social media. She announced to her fans she was still pregnant and didn’t give birth yet. But B&B fans noticed that she was quiet on Sunday. Many had a feeling that Jacqueline was going to give her baby announcement soon. Even some of them commented that they had a feeling on her Instagram post.

“I thought so that you were in labor. I just checked your IG two hours ago and there was nothing,” one fan wrote. “And what a beautiful name. Take your time and just enjoy with the rest of your family.”

Jacqueline also received congrats from Katrina Bowden, who plays Flo Fulton on B&B. Lauralee Bell, who plays Christine Williams on The Young and the Restless also shared her thoughts. In October 2020, Jacqueline announced that she was pregnant again.

“Once you pop, the fun don’t stop!” she wrote in her baby announcement at the time.

She broke the news on social media in a unique video. The clip showed in a blue tracksuit with rainbow stripes. Then, she tossed her glittery boots in the air and exposed her baby bump in a white blouse and black underwear. She finished off the beautiful look with her thigh-high boots. Jacqueline looked happy as she rubbed her belly and smiled at the camera.

Along with the fun video, the 33-year-old Canadian also posted a series of emojis and revealed she was 23 weeks along in that video. Since then, she’s posted fun maternity shoots on her Instagram page. Fans know how creative she can be with her social media posts.

Congrats to Jacqueline and Elan for their little bundle of joy.