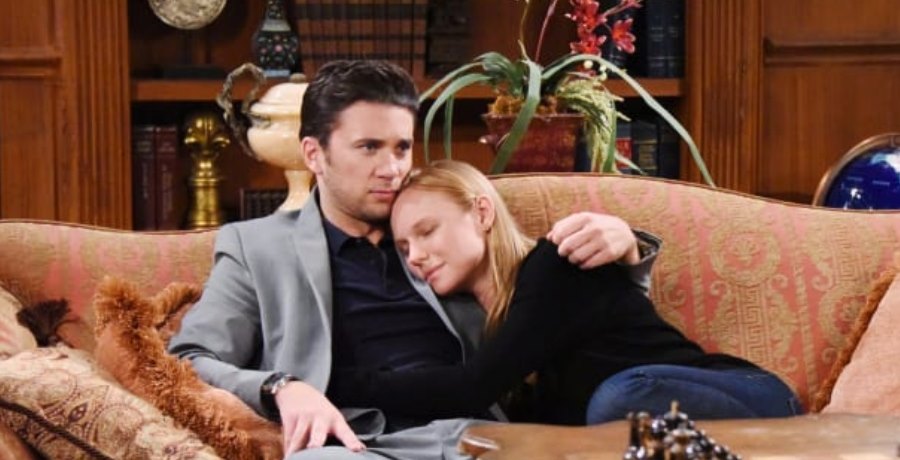 Days of Our Lives spoilers wonder if Chad DiMera (Billy Flynn) and Abigail Deveraux (Marci Miller) will soon welcome a third child to their family. The couple is currently dealing with the aftermath of Chad’s one-night stand with the naughty nanny, Gwen Rizczech  (Emily O’Brien) —who also turns out to be Abby’s older half-sister.

Abigail’s moved back into the mansion. She’s committed to her marriage and family with Chad. So, is a baby the perfect way for this fan-favorite super couple to get their marriage back on track on the NBC soap?

Days of Our Lives Spoilers: Fans Think Marci Miller Is Expecting A Baby

Adding strength to the Days of Our Lives actress’s baby news rumors is an online baby registry for Marci Miller Matteson and her husband. According to the myregistry.com baby wish list, the couple should expect their little bundle of joy in just under six weeks. A glance at the registry provides no clues as to the gender of the baby. Neither the DOOL actress nor NBC has confirmed or denied the baby news.

Days of Our Lives spoilers know that Abigail Deveraux returns home to the mansion to work on her marriage to Chad. The two have two children together. So they are focused on making sure they have a happy childhood with two full-time parents. Abigail hasn’t completely forgiven Chad for his accusations of her infidelity with his brother Jake Lambert (Brandon Barash). Plus, she’s not entirely over his drunken one-nighter with her half-sister. Still, she’s moved back into their house and their bed.

Speculation of Days of Our Lives star Marci Miller’s real-life pregnancy teases the powers that be incorporate it into the Chabby storyline. After all, it’s a classic soap plot to have a couple have a baby to save their marriage. Heck, it’s a very real-life occurrence as well that resonates with many Days of Our Lives watchers. No doubt a third Chabby baby would be a great addition. However, in proper soapy form, there’s always a glitch to add to the drama. In this case, it’s likely Gwen Rizczech.

Days of Our Lives: Abby and Gwen Both Pregnant With Chad’s Babies?

Days of Our Lives spoilers remind fans Chad DiMera and Gwen Rizczech slept together on New Year’s Eve. Although Chad was too drunk to recall all the details, Gwen happily shares all the juicy details with Chad’s wife. At that time, Abby just thought Gwen was her nanny, but as it turns out, Gwen is also Abby’s sister. Gwen planned this to hurt her unknowing little sis.

Now DOOL spoilers suggest Gwen Rizczech might end up expecting the next DiMera heir. However, there’s now speculation of a third Chabby baby on the way. So Chad DiMera might find himself the expectant father of two new babies from two women who happen to be sisters on the NBC soap.