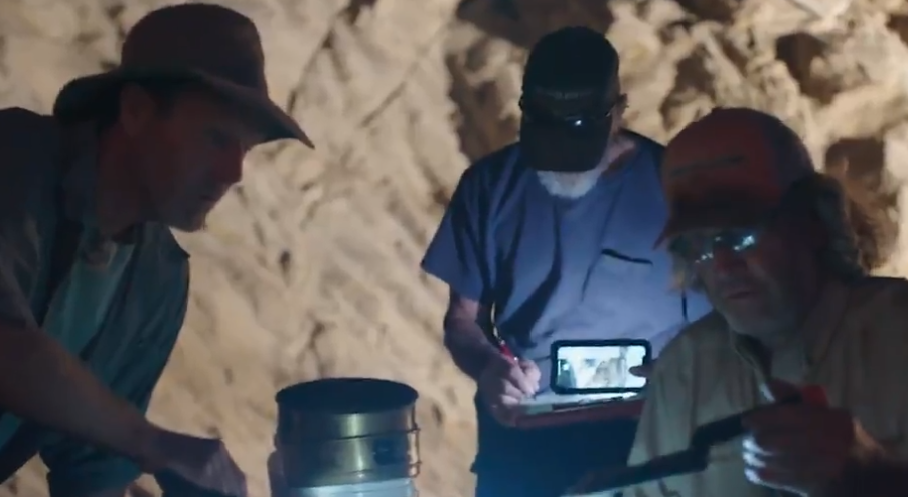 Season 1 of Mystery at Blind Frog Ranch is coming to an end. Episode 5 left viewers scratching their heads as the team appeared to make metal out of sand. Eric Drummond seemed particularly perplexed at what was happening. Through his analysis, Eric finds the metal contains silver.

In the final seconds of Episode 5, fans witnessed a potential paranormal possession happening near Chad Ollinger’s campsite. For some viewers, this scene was astonishing. However, other viewers found the scene to be corny and completely staged.

TV Shows Ace is attempting to get to the bottom of the Mystery at Blind Frog Ranch. The Uintah Basin has a long history of paranormal incidents. There are so many people reporting unexplained occurrences that even the United States Government is taking interest in the area. With so much attention, it is certainly something worth looking into.

Will the men at Blind Frog Ranch be able to uncover the hidden treasure or will they walk away with nothing?

Find out on the season finale of Mystery at #BlindFrogRanch. Tune into @Discovery Friday at 10p or stream on #discoveryplus. pic.twitter.com/uSHHYd6WPW

TV Shows Ace spoke with a family friend of Duane Ollinger about the Mystery at Blind Frog Ranch. Staff Sergeant Jordan McKee is a Utah resident familiar with the Uintah Basin. He has served in the United States Army since 2010. He holds many achievements including two Meritorious Unit Citations as well as two Valorous Unit Awards for his involvement with operations in Afghanistan. Among these achievements, Staff Sergeant McKee also holds a secret security clearance and agreed to speak with TV Shows Ace about the Mystery at Blind Frog Ranch.

Let’s start by telling the viewers a little about yourself.

Staff Sergeant McKee: Sure thing, I am from the area. Growing up I had a few encounters that were reminiscent of the Skinwalker Ranch stories. It sent me on a quest to understand and uncover what these phenomena in the Uintah Basin actually were. After learning how to do CE5 protocols in studies I began to uncover that not only was there a phenomenon of the area but that it was indeed somewhat interactable and had a direct correlation to conscious efforts to request it to manifest by calming the mind.

Robert Bigelow (the previous owner) utilized similar methods when he owned the ranch but his efforts are largely classified. Anyways long story short on that, I have spent the greater part of my life implementing these protocols and studies around the nation, but none have had the fruits of the Uintah Basin. My most notable experiment/experience was done very near Blind Frog Ranch which led me to realize there was a significance to the location.

Fitting into the picture- When I married my wife Ashley, I quickly found out that her father has been working with Duane for years and is a great friend of Duane. Before the ranch was really famous he and my father-in-law both searched for gold around his ranch and other places. Through those times I eventually started talking to Duane about my own studies and he essentially told me the story of Jeremiah Davis. Being a natural skeptic I was at first put off by it but as I got to know the story and Duane I realized some of the things Jeremiah had discussed with Duane were incredible and made sense with what I was uncovering about the basin.

Eventually, Duane had me create a Facebook group for the ranch while they were filming the show. I eventually got him into contact with other researchers like Ryan Skinner and a few others. However, he never really heard back from them. Since then I have been running the Facebook page he wanted to be created and I try not to let many outside influences push the story in their own way like what happened to the skinwalker saga.

How close are you to Duane Ollinger?

Staff Sergeant McKee: I am a family friend of Duane’s. To be more specific I first came into contact with him after I had married my wife. At that time her father Jeff had been good friends with him for years.

There have been many claims of paranormal phenomena happening at Blind Frog Ranch. Is there anything you have witnessed that gives validation to these claims?

Staff Sergeant McKee: Although I have not been to the ranch at night, I have not seen any directly on the ranch. However, I have been part of multiple paranormal encounters within 15 miles of the ranch. My most notable instance very near the ranch, I and two others ended up ‘interacting’ with a few dozen orbs and near clear spheres on the side of a mountain for about two hours after conducting CE5 protocol research. This experience and other encounters near there allow me to understand that there is something very special going on near or on Blind Frog Ranch and to me, that is the main reason why this area needs to get more research done like it. The Uintah Basin is a living paranormal study zone.

Can you explain what CE5 protocol research is?

Staff Sergeant McKee: Sure, typical research study- or paranormal study- is centered around the history of a situation, the facts of an encounter, or even possibly the physical evidence of a situation. CE5 protocols center more so on how one can interact with ET/Paranormal phenomena. The idea is not my own. In fact, it was popularized by Dr. Steven Greer. The idea behind it is- ET phenomena and extrasensory encounters cannot be quantified by material means fully. Instead, it has been learned that this intelligence has means of communication through the higher thought process. Quite literally it is going into meditation, opening yourself to contact, and then interacting and recording any encounters that come of it.

The research is a bit ahead of its time but it is something that has been gaining attention from celebrities and various leaders from around the globe due to its unique approach. Anybody can do it with practice and It is a simple task but can be difficult to achieve at first. I have done it around the nation and even in other countries. The Uintah Basin hands down produces the greatest result and to me, that is worth investigating. Based on information and experiences told to me by Duane, I would not be surprised if his ranch is central, or at least plays a big role, in this phenomenon.

Is this something that only the person conducting the research can experience?

Staff Sergeant McKee: It can be caught on camera so long as the batteries don’t get drained on the equipment (something commonly experienced). Also, typically larger groups produce better results. There is a great documentary by Dr. Greer that is full of video and other evidence called CE5.

Many viewers have been skeptical of the show accusing Discovery of staging the events. What are your thoughts on what viewers have witnessed so far? In particular, the supposed possession witnessed at the end of last week’s episode.

Staff Sergeant McKee: I understand why to some, it would seem staged. At the end of the day, Duane is one straight shooter. I don’t think Duane could stage anything even if he wanted to. That being said I have had enough strange experiences in the basin, to know as a matter of fact that this area is full of…. crazy happenings. If I hadn’t seen it for myself and studied it, I probably would not believe it either.

What exactly is it you are looking for? Skinwalkers? Aliens? Spirits?

Staff Sergeant McKee: I would say all three and more. I think putting it all into an “extra-dimensional reality” would be more correct. Although you might see a UFO above, you might also see lights around you. You might catch a glimpse of what might call a shapeshifter. At the end of the day, it seems all exist in this reality that exists outside of our own immediate perceptions- but as it turns out, we can still possibly interact by using our higher mind as a force to bridge that unmaterial gap of reality.

What would you like to say to the fans of Mystery at Blind Frog Ranch?

Staff Sergeant McKee: I would tell them to continue to follow the story of Blind Frog Ranch and the Uintah Basin. If they are interested in the paranormal, you are possibly witnessing the beginning of one of the most important studies in paranormal history. There is a good reason why government officials have had so much involvement in this area. Always keep an open mind and know that the area will most likely become a study point for researchers for years to come.

Staff Sergeant McKee is currently writing a book describing his life as well as his experiences in the Uintah Basin. The working title of his book is Student of the Phenomena- An Unusual Way To Understanding The Unusual. This is certain to be an interesting read.

Be sure to watch the season finale of Mystery at Blind Frog Ranch on February 5th at 10 pm ET. Check back with TV Shows Ace for more news and updates.