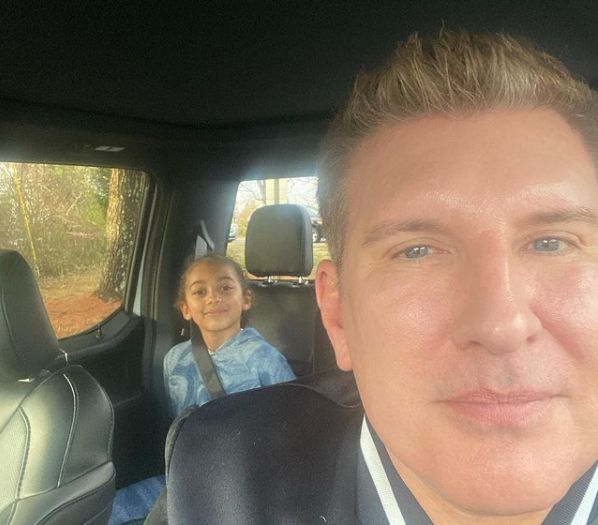 Todd Chrisley is the patriarch of the USA Network show, Chrisley Knows Best. The family has been appearing on the show for eight seasons now, and they have always been open about their beliefs and opinions. Fans know that you do not mess with Todd. He will tell you what he thinks and he will not hold back. Todd and his wife, Julie, did just that in an interview with Tamron Hall. The couple addressed racially discriminatory comments made that were made against their bi-racial granddaughter, Chloe.

Todd came out of the gate swinging. “I think anyone that watches our show knows that if you come for my children, or my wife, or our marriage, then I will drag you.”

Viewers of Chrisley Knows Best have watched Chloe grow up on the show for the last eight years. Chloe is a spunky little lady and fans call her the beating heart of the show. However, some people still do not know how Todd and Julie came to have custody of Chloe.

Chloe Chrisley is the daughter of Kyle Chrisley, Todd’s son from a previous marriage, and Amber Johnson. Family court awarded Todd and Julie full custody of Chloe in 2014. Kyle’s ability to properly care for Chloe was called into question after he reportedly had a mental breakdown. Kyle has bipolar disorder but has refused to take his medication. He has also admitted to substance abuse issues. Amber was reportedly arrested and charged for fraud.

Chloe has grown up in front of our eyes except for an extended absence during 2014. At the time Kyle requested money for Chloe’s appearances on Chrisley Knows Best and threatened to sue the network. Because of these demands, Todd chose to not have Chloe appear on the show for a time. He explained, “At the end of the day, we had to do what was best for Chloe. We did not want to drag her through all this and there was no way we were going to pay Kyle a penny.”

After the death of George Floyd while in the custody of the Minneapolis police department, the Chrisleys decided they needed to discuss race in America. At that time Todd, Julie and Chloe spoke on the Chrisley Confessions podcast. During the episode, Todd and Julie discussed how they were preparing Chloe for the future and situations that she may encounter. Although Chloe was only seven at the time Todd was adamant, “Chloe needs to be involved in these conversations at seven.”

In the interview with People, which will air in full on Monday, February 8, 2021, Todd said Chloe is “doing fine.” The couple has shielded her from what people say over social media Todd told Tamron. He continues, “We don’t tell her those things. We take that information and we use it as a tool to help us teach her or to prepare her for what’s coming.”

Hall then asked the couple if they would consider removing Chloe from the show to protect her from the hate. Julie Chrisley answered, “Absolutely not,” adding that Chloe is part of their family. And she belongs on the show. “We’re going to continue to support her, continue to reinforce to her that she is exactly the way she’s supposed to be, exactly the way that God made her to be, and that there’s absolutely nothing to change,” explains Julie.

Todd agreed with Julie. He added that taking Chloe off the show would not “protect her against the ignorance of the world.”

The issue is in the heart

Todd admitted in the interview that before Chloe, he had never dealt with racism. He has spoken in the past about having to educate himself on the issues as well as silent racism. He says, “What I do see is that we, as a white couple in America, have never dealt with racism until Chloe and we have been in that privileged sector of not having to have that added stress on us as people.”

Todd has called Chloe “the sweetest gift from God,” and he is grateful to have her. Todd said he truly believes God sent them Chloe for a reason. He says, “God brought Chloe to us and I think that God gave us Chloe because we needed to be changed. We needed to be able to use our platform to help those who may not have a voice.”

But the question remains, how do you create positive change in the world with regard to racial issues. Todd gave his opinion on that too. He says, “What changes that is not going to be Democrats, it’s not going to be Republicans, the House, the Senate, the Congress or the Oval Office.” Todd Chrisley is not counting on people in power to create change. Ultimately, he said, “What’s going to change the world is what begins at home — what we do as a people, not as a politic.”