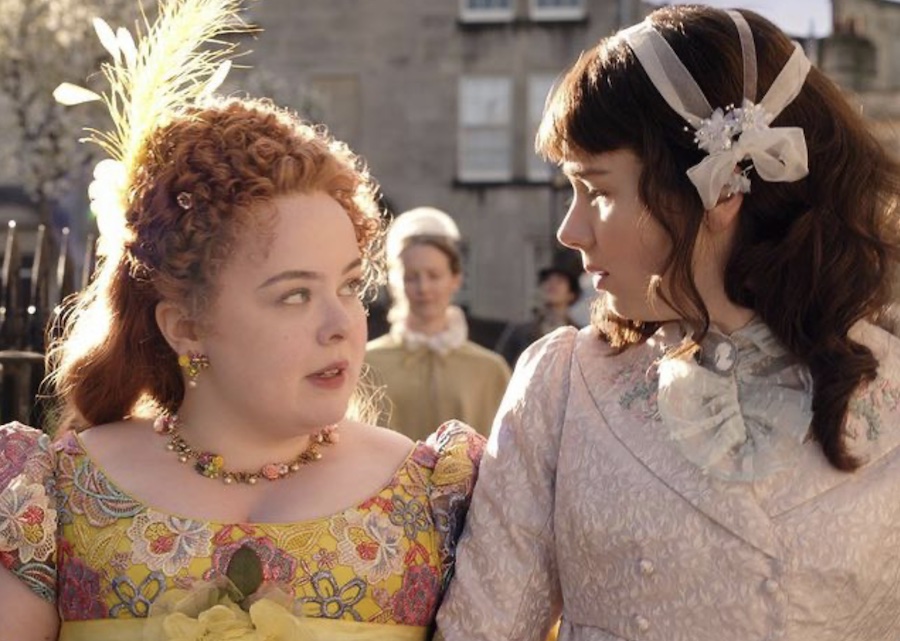 Bridgerton fans may be fanning themselves after hearing some BTS dirt from star Nicola Coughlan. Turns out, there was Peneloise behind the scenes drama. Moreover, it was not revealed until Nicola appeared on The Kelly Clarkson Show.

What went down between the costars, and are they still friends?

On Sunday, when Bridgerton’s Nicola Coughlan appeared on The Kelly Clarkson Show on Sunday, the Irish actress confessed how nervous she was to star in her first Shondaland series. According to the video, who reported the story, Nicola was very open about her fear. “It was my first day on set, and it’s quite terrifying, getting a big Shondaland Netflix job, and you think ‘I just don’t wanna screw this up’.”

Sounds very real and relatable. But, who could imagine that the Derry Girls star could screw up anything? She’s a seasoned actress. But, then there is wardrobe. And when you are about five feet tall, they want to make you taller. She said,  “They said to me, ‘you’re very tiny, let’s put you in heels’ and I thought ‘yep, I’ll do anything you want me to do.'” Who was Nicola to disagree with this?

By the time she donned the heels, she had already been stuffed into a corset, all dolled up for the Regency period. But, she was ill-prepared for the sorts of balance issues that a woman from 1813 would experience. She explained, “It became evident pretty quickly that with the corset and the heels, my balance was not so amazing.”

Now, for the final touch. A parasol. A Regency lady does not want to freckle her skin or get drenched by the ubiquitous London rain. So, she started “walking along.” But, she fell three times! Unfortunately, the third time was far from a charm. She was holding the parasol, and as Nicola explained, “in the wrong hands is a deadly weapon.”

Nicola proceeded to fall forward and stabbed the startled Claudia Jessie in the hand. She wound up bleeding!

Should Bridgerton fans be worried that the onscreen besties hate working together, based on this bungle? Far from it. Despite making the Vanity Fair costar bleed, Nicola and Claudia became besties, just like their onscreen characters!

In fact, the two frequently text. Moreover, Nicola shares a lot of Peneloise memes with Claudia.

We should add, Kelly Clarkson has a general tip that if she is wearing a long dress, she wants “the easiest shoes” to prevent such mishaps. Needless to say, Nicola did not wear heels the rest of the shoot. Otherwise, Bridgerton would not have made it to Netflix for Christmas 2020.

There Will Be Season 2

Meanwhile, fans are getting excited about Bridgerton Season 2. They should start filming in March. They should have completed filming by now, but the worldwide pandemic has wreaked havoc on the filming schedule.