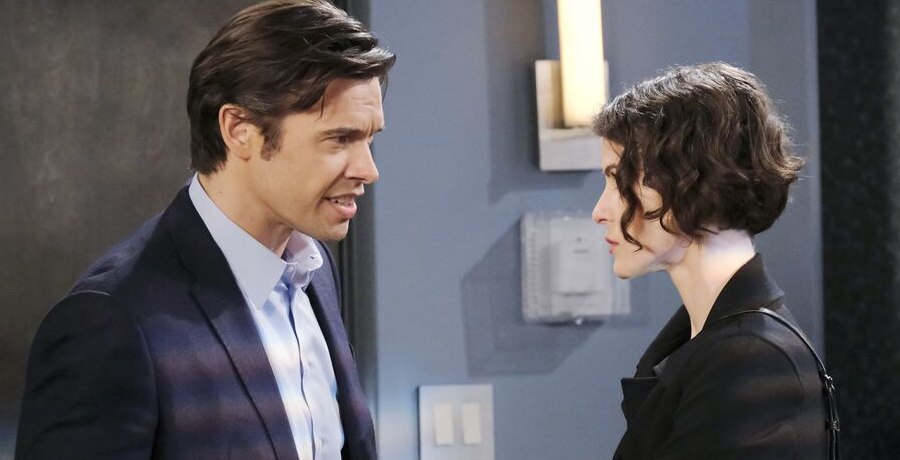 Days of Our Lives spoilers reveal shock waves will run through Salem. A few divas are hitting the town, and a chilling departure sets the stage for a February to remember. Here are six stunning DOOL spoilers you never saw coming on the NBC soap.

Days of Our Lives spoilers promise love is in the air this February as Valentine’s Day approaches. Xander Cook (Paul Telfer) once again failed to come out as top dog at Titan with his uncle Victor Kiriakis. Even after exploring Philip Kiriakis’s (Jay Kenneth Johnson) mob connection, Uncle Vic stood with his only living son.

So, Xander realized his time with Titan is over, and all that really matters is how much he loves Sarah Horton (Linsey Godfrey). This Valentine’s Day “Xarah” fans’ hearts will melt when Xander proposes to Sarah in the most romantic way.

Days of Our Lives spoilers remind Jake Lambert (Brandon Barash) chooses Kate Roberts (Lauren Koslow) over Gabi Hernandez (Camila Banus). But Gabi isn’t one to accept defeat so easily. Recall she’s a master at getting revenge. So look for Gabi to cozy up to Kate’s son Philip.

No doubt Kate will not take kindly to her son’s new romance. Gabi and Philip have the potential to be a powerful force in Salem. Gabi Chic would be a great addition to Titan’s portfolio, a way for Philip to win back his father’s good graces, and most importantly, another way for Gabi to stick it to Kate.

In the latest #DAYS, Jake is surprised when Gabi shows up in his office. https://t.co/ZsCmioRrzb pic.twitter.com/7egYQHz5AV

Kristen DiMera (Stacy Haiduk) may be behind bars, but that doesn’t stop her from keeping her new arch-rival Chloe Lane (Nadia Bjorlin), away from Brady Black (Eric Martsolf). Days of Our Lives spoilers say Kristen summons an unlikely person to wreak havoc upon Brady and Chloe’s friendship.

According to DOOL spoilers Kristen asks her pal Susan Banks (also Stacy Haiduk) to run interference between Chloe and Brady. No doubt the antics will be hilarious for fans and rather annoying for both Brady and Chloe hint Days of Our Lives spoilers.

Susan and Laura will both be back in February. Here’s one of the best #Days moments ever, Laura exposing Susan at the Graceland Wedding. June 24, 1997. So epic! pic.twitter.com/siFAazRZgI

Days of Our Lives spoilers show Kate Roberts gets a new job at DiMera Enterprises thanks to her boy toy boyfriend, Jake Lambert. Kate’s clearly bored with the meager role of being Abe Carver’s (James Reynolds) press secretary. So, of course, she jumps at the chance to get her claws back into DiMera Enterprises.

New CEO Jake Lambert thinks hiring his bed buddy will help him master his new role at the helm of DiMera. But we all know Kate has lofty goals. So perhaps her romp with Jake was all a ploy to climb to the top of the corporate ladder once again. No doubt Kate’s new position will not sit well with Chad DiMera (Billy Flynn). But he probably won’t notice for a while since he has his hands full trying to win back the good graces of his wife Abigail Deveraux (Marci Miller).

#5 Vivian Alamain Back With A New Face

Days of Our Lives spoilers confirm Linda Dano debuts as the third recast in the role of Vivian Alamain. Last we saw Vivian, she and her sidekick Ivan Marais (Ivan G’Vera)  faked her death. However, Vivian is far from dead, and soon she will make a splashy return to Salem.

Top of her list is avenging the death of her son Stefan DiMera (Brandon Barash). Recall he died at the hands of Detective Lani Price (Sal Stowers). Soon it’s revealed she is the mastermind behind the kidnapping of the Grant twins, and what she intends to do next will shock everyone.

Days of Our Lives spoilers for February Sweeps tease there’s a murder in Salem. This sparks the start of a huge who-dun-it, according to DOOL head writer Ron Carlivati. The groundwork is being laid, so the murderer is not as obvious as it seems. Of course, who gets offed also is still up in the air. However, signs point to either Charlie Dale (Mike Manning) or Gwen Rizczech (Emily O’Brien) as the likely victims.

Certainly, both have long lists of Salemites that would love to see them six feet under. However, Sami Brady (Alison Sweeney) also returns in February, and Ron likes to have her return with lots a drama, and a big bang no doubt fits the bill. So perhaps Sami’s tied to the murder victim, which means Charlie looks like he’s about to get the Sami Brady treatment one way or the other on the NBC soap this February.

Make sure to check TvShowsAce often for all the latest Days of Our Lives news and spoilers.