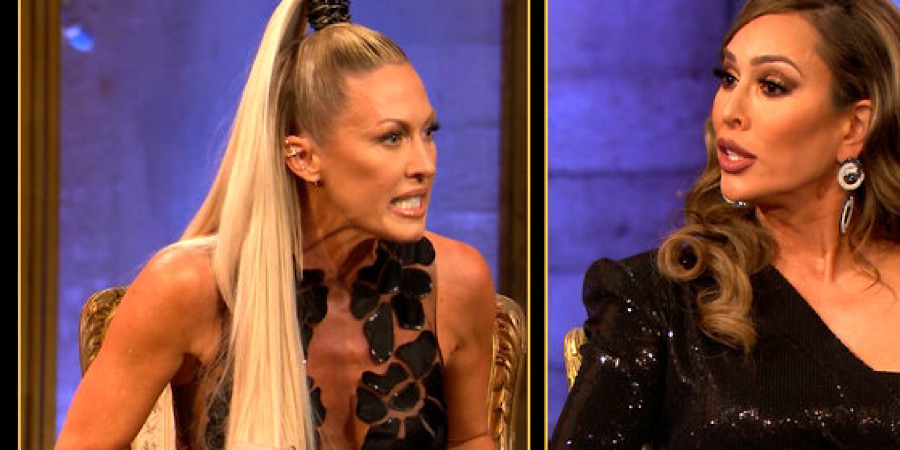 Kelly Dodd has given Bravo an ultimatum: either Braunwyn Windham-Burke goes or she does. After a season of Dodd throwing jabs at her RHOC co-star, the two former friends have reached a new level. During an Instagram Live last night, Kelly addressed several issues, one of them being Braunwyn. And she is saying she cannot and will not work with her come Season 16.

Kelly and The Fake Alcoholic

It is really hard to pinpoint when Kelly and Braunwyn’s friendship went south. Kelly actually brought Windham-Burke onto the show during Season 14. She was a hit amongst the group as a fun party girl and still remains close to former housewife, Tamra Judge. But, when she revealed she was an alcoholic at the beginning of this season, everything shifted. Their friendship took a turn and it got even worse when Dodd accused Braunwyn of faking her alcoholism. She went on Watch What Happens Live and publicly called out her co-star for lying about her sobriety.

“I don’t think that she had seven kids so she could ‘not drink’ and I know her well enough that this was a pre-plotted thing that she wanted to do to get her own show. She wanted to get her own show, her talent agent told her to stop drinking. It’s all contrived. I don’t believe that she is a real alcoholic,” Kelly told Andy Cohen. This was not well-received and she had to answer for it during part one of the RHOC reunion last week. Co-stars Gina Kirschenheiter and Emily Simpson may be closer to Dodd but they wholeheartedly believe Braunwyn is an alcoholic.

The Bravo Ultimatum- Will Kelly Return?

Along with coming out as an alcoholic, Braunwyn also came out as a lesbian. Whether or not Kelly believes this is a storyline, too is another issue but they also clash politically. Braunwyn, like many viewers, thinks Dodd is inappropriate. But, what has pushed Kelly so far she will no longer film with Windham-Burke? “I know for a fact that I cannot film with her. There’s just no way and if she comes back then I’m out because I know for a fact that I cannot. She’s dangerous and calling people racists and homophobic.”

Additionally, Kelly responded to Braunwyn’s claims she is a bad mom for traveling during Covid. Kelly says she was selling homes to avoid multiple mortgages while her co-star was out in Utah partying with the Salt Lake City housewives. Kelly concluded that Braunwyn has said the same thing about filming with her so it seems Bravo has a decision to make. No casting choices for the upcoming season have been made. Who would you prefer to see: Braunwyn or Kelly or neither? Let us know in the comments and don’t miss the conclusion to the RHOC reunion tonight at 9 pm only on Bravo.