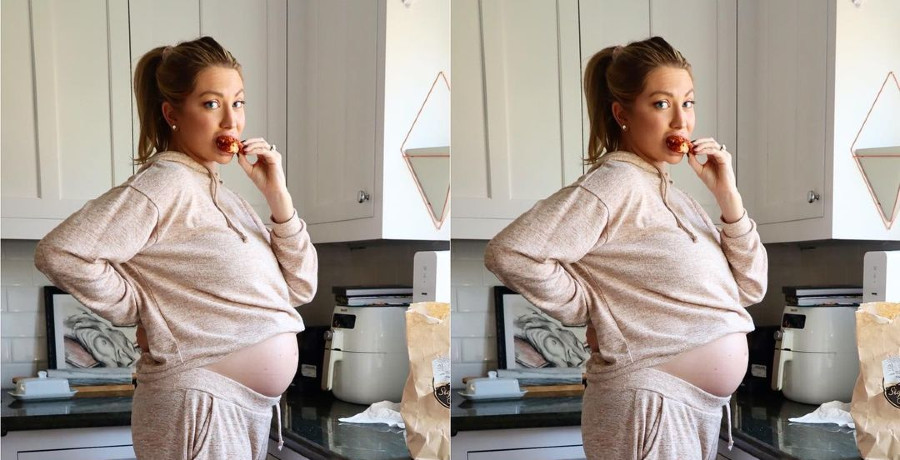 Get ready for more cuteness than you can stand. Two weeks after giving birth, Stassi Schroeder released the first glimpse of her baby daughter. She also included several videos of the adorable baby. Hold on to your ovaries, ladies!

Vanderpump Rules fans have been on bump watch since Stassi announced her pregnancy in June of 2020. By the end of the year, Stassi was ready for her baby girl to come into the world. However, it seems Stassi passed her stubborn streak on to her daughter. No matter what Stassi tried – from so-called pregnancy salad to a bedroom romp with her husband – the baby wasn’t ready.

But then, on January 7, 2021, Hartford Charlie Rose made her way into Stassi and Beau Clark’s arms.

The two have gone mostly social media quiet since then. Fans of the Bravo alum impatiently waited for the first glimpse of baby Hartford. Beau did post a sweet, but grainy, video of Stassi breastfeeding her daughter.

Many speculated that Stassi might make the big reveal of Hartford’s face on the cover of People magazine.

But instead, Stassi surprised everyone by sharing intimate photos of her new daughter on Instagram.

Stassi wrote a sweet note explaining the reason for staying quiet for the last two weeks. She wrote that she and Beau have been “enjoying every moment” with Hartford. Including “every cuddle, every sound, every poop.”

The former Vanderpump Rules star wanted to mark her daughter’s two-week birthday by sharing “her little girl” with the world.

Stassi didn’t stop at just sharing a photo of her daughter. She included THREE videos of Hartford Charlie Rose. Longtime fans of Stassi Schroeder know she is not a mushy person.

Well, at least she wasn’t. Her daughter is not even a month old and has already changed Stassi. She wrote that her daughter is “the best thing that’s ever happened” to her.

For his part, Beau Clark shared a video on his Instagram zooming in on Hartford’s spit-up as the ecstatic Girl Dad burped his daughter.

Head over to Stassi’s Instagram to see the other videos of baby Hartford.

Congratulations to Stassi and Beau on their adorable little girl!

Bravo has yet to announce if or when Vanderpump Rules will return for another season. Be sure to follow our Facebook page for any updates, as well as all the latest TV news.

‘Love Island USA’: What To Know About Casa Amor, Including Air Date
‘B&B’ Spoilers: Eric Forrester OUT As Quinn Flips The Script?
Everything Known About Kaitlyn Bristowe & Jason Tartick’s Future Wedding
2 Other ‘RHOBH’ Stars Are Dealing With Their Own Legal Drama
‘I Love A Mama’s Boy’ Spoilers: CRAZY Season Premiere Sneak Peek