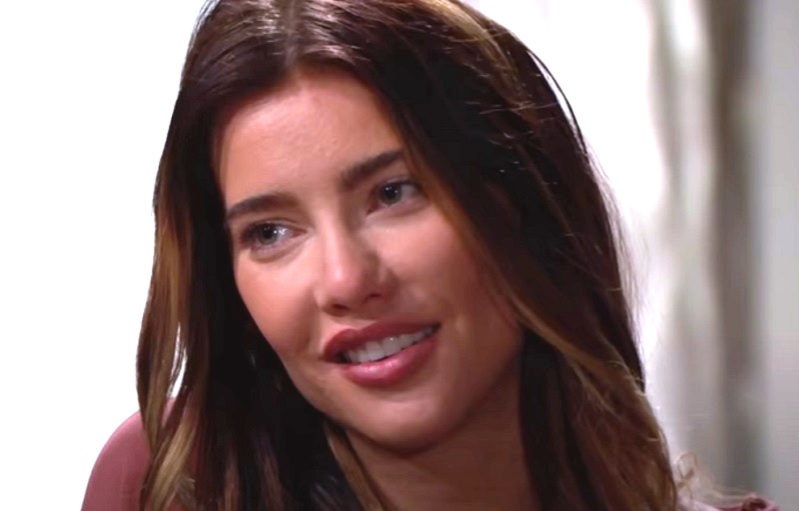 Bold and the Beautiful spoilers suggest Steffy finds Finn’s new attentiveness flattering but she’s an independent woman who won’t be managed. This week on the Bold and the Beautiful Finn (Tanner Novlan) said all the right things to Steffy Forrester (Jacqueline MacInnes Wood). Finn stepped up to the plate with promises to the woman he loves. He did this despite the chance Steffy is carrying another man’s child.

It’s not easy to flatter Steffy. She grew into an independent single mom and career woman before the eyes of the Bold and the Beautiful fans. But she was worried about what Finn would do once learning of her pregnancy. Especially since there’s a possibility her baby is not his.

Finn took care of reassuring Steffy this week on B&B. He told Steffy that he’ll be there for her whether or not the baby is his. So, Steffy feels a lot better than she did.

She wasn’t sure if she’d blown her future with Finn or not. But that is no longer up in the air for her. Finn claims he’s here to stay. But it sounds as if some contingencies go along with this promise.

Steffy got a taste of a scorned Finn this week when he cornered Liam Spencer (Scott Clifton). From there he went to Steffy and immediately told her what he did.

He didn’t seem to think he overstepped his boundaries. But Bold and the Beautiful spoilers suggest Steffy starts to feel like he does more and more as the next few weeks play out.

While it may be flattering for Finn to say he’s going to take care of things, Steffy is not used to this. He’s already put his foot down when it comes to changing her relationship with Liam. Although the B&B fan jury seems divided over Steffy needing that push from Finn. Many believe this is something Steffy needs to do with or without him.

So, other than the matters pertaining to Kelly, Finn’s foot is down and anchored about Liam running to Steffy.

Bold and the Beautiful: Underlying  Causes

Bold and the Beautiful spoilers suggest the allegations keep flying at both Steffy and Liam in the coming weeks. Finn grilled Steffy about her love for her ex. He wanted to know if she loves him the way he loves her. Or perhaps she feels some obligation to Finn for being there when problems emerge, he suggested.

Finn asked Steffy this on Wednesday’s Bold and the Beautiful episode. Then before Finn’s talk with Steffy, Hope Logan (Annika Noelle) accused her of sabotaging her marriage. Hope also accused Liam of secretly wanting Steffy.

In the next few episodes, B&B spoilers suggest Thomas Forrester (Matthew Atkinson) is the next one to tackle both his sister and Liam over their night of passion. While Thomas looks like he’s up to his old tricks lurking at the door, he might surprise the Bold and the Beautiful fans this time around.

Everyone, including Brooke Logan, (Katherine Kelly Lang), has questions about the underlying feelings these two have for each other. Even Steffy’s dad, Ridge Forrester (Thorsten Kaye) questions the motives behind these two. They always seem to find their way back to each other, according to the B&B spoilers.