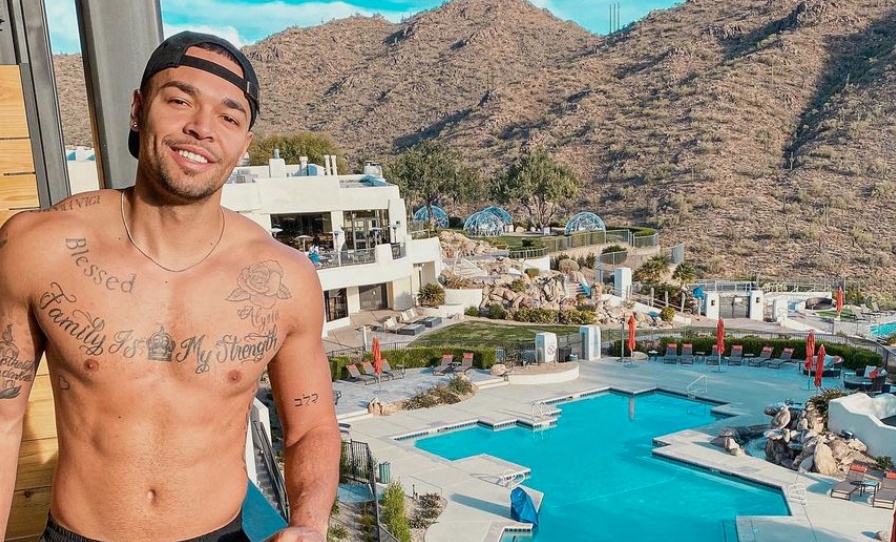 Love Island couple, Caleb and Justine have broken up. After some shocking news came out, Caleb has been getting death threats. Now, he’s addressing those issues on social media.

Justine and Caleb split after becoming a fan favorite couple on Season 2 of Love Island USA. A photo came out and Twitter has been outraged. There is a photo of Caleb and his new girlfriend with his family. Not only did Justine never get to meet his family, but in the photo, they are all wearing matching pajamas. Seems they are pretty happy together which is awful for a suffering Justine.

“Caleb cheated on Justine with Kaz Brown with Caleb whole family in matching pjs ass bitches. Cely and Justine the best relationship from #loveisland period!,” another says about the couple.

The feelings of everyone on Twitter totally makes sense. However, some people have been taking it to extremes.

Because of all of this, Caleb has been getting a lot of social media hate. People are standing up for Justine, and threatening Caleb to do so.

He made an emotional post on Instagram and it seems he is going through a lot with this. He says that he woke up to death threats.

“What a strange feeling it is to wake up to death threats,” he starts off.

“It is simply impossible to fully capture the complexity of one’s identity or character through a screen. Not through a couple feed posts each week or series on your phone screen. Not even through an hour a day five days a week for a month on your TV screen,” he writes.

It doesn’t end there

He continues to say that he is just figuring out life and trying to learn from what happens. He continues talking about all the people that feel hurt because of him.

“I understand many of you feel deserving of an apology or an explanation. I think to go without saying what I am about to say next would not be a good reflection of how I truly feel,” Caleb says.

He continues: “I am painfully sorry to those in my life who are being attacked or judged based sold on the fact that they are associated with me. I am sorry to the people who have supported me and no longer feel entitled to me because I have already given you a lot.

Finally, he writes “I let you into my relationship. I showed you glimpses of lifelong friendships I cherish. I even shared my beautiful family.”

It seems that maybe reality TV was a lot for him and now he is struggling with his whole life being out on display, especially when his character is questioned.

Honestly, this is all such a terrible situation. It seems like it was certainly the right thing for Justine and Caleb to breakup. No matter how terrible it is now, this all seems very toxic for the couple.

Are you sad that the Love Island couple broke up? Let us know what you think in the comments below. Come back to TV Shows Ace for more news on all of your favorite reality TV stars.