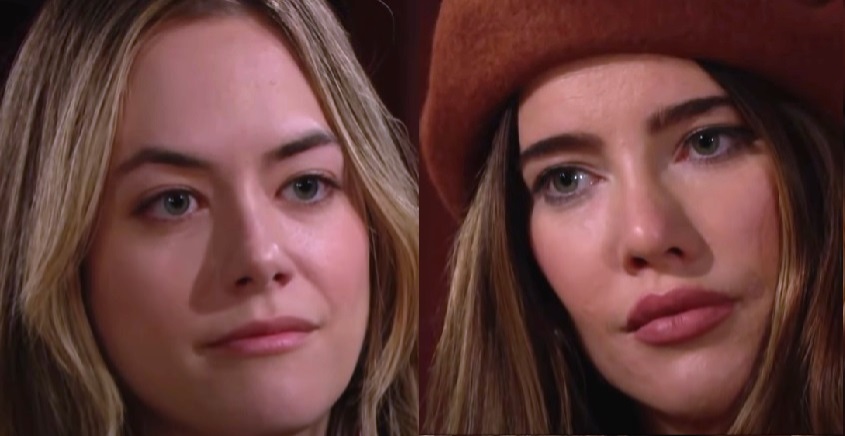 The wrath of a scorned woman played out on Bold and the Beautiful Friday. But this cliffhanger carries over to Monday for the results of this face-off. That’s when B&B spoilers hint at Steffy hearing homewrecker accusations just one too many times from Hope.

It looks like Hope meant business when she said Steffy’s become what her mother has called Hope’s mother for years. But apparently as a lady, Hope couldn’t bring herself to repeat it.

Hope is relentless as she goes after Steffy. It seems Steffy finally realizes her answers to Hope’s questions don’t make sense. She finds herself telling Hope that Finn has to be the father of her baby. After all, they’ve been together for a while and Liam was a one-nighter. It looks like Bold and the Beautiful alludes to biology 101 when Hope rolls her eyes. She is probably thinking… it only takes one time.

At the same time that Hope verbally beats up her stepsister, Liam Spencer (Scott Clifton) is under rapid-fire from Finn (Tanner Novlan). It seems like Finn put Liam in a different light for  Bold and the Beautiful fans. Possibly, he did the same for Liam as well.  By the time Finn got through with him (although there’s more to come on Monday), Liam looked like the pathetic man Finn described.

Finn summed up Liam in a B&B nutshell. He painted a rather awful picture of what Liam’s adult life has been like and from where the fans sit, he was right on the money. While Liam defended himself at first, he couldn’t go any further because it didn’t make sense. It looked as if Liam also realized that he was looking desperate to offer an explanation when there wasn’t one to offer.

Liam claims he was devastated thinking Hope cheated on him. So, he wasn’t thinking straight, then of course the alcohol is a factor as well.  That makes no sense to Finn, as Liam’s reaction doesn’t cut it with him.

The Bold and the Beautiful doctor knocks Liam off his game with accusations. He tells Liam that as a man, he should have charged into that apartment and confronted Thomas Forrester  (Matthew Atkinson). He should have defended his marriage to Hope. Instead, he ran into the arms of Steffy as well as her bed.

Liam is “a man with no integrity, no principles, and a man who cheats on his wife when his ego gets wounded, it’s pathetic,” said Finn. He doesn’t buy the “error in judgment” that Liam flippantly throws Finn’s way.

Bold and the Beautiful – Keep An Eye On That Picture

Both Hope and Finn mention that photo hanging on the wall at Steffy’s house. Finn thinks Liam sees it as reassurance that Steffy’s still stuck on him. Hope sees it as wishful thinking on Steffy’s part. But B&B predictions have that picture becoming a thing of the past soon, as both Finn and Hope don’t like it.

Bold and the Beautiful spoilers promise that the photo of Liam and Steffy will come down. But just how that happens sounds almost like it becomes a ceremony for Finn, in a fit of anger.

Finn already laid the groundwork for Liam if Finn is the father of Steffy’s baby. Liam didn’t like what he heard but next week the details become clear. For Liam, life with Steffy changes drastically going forward. It looks like Liam is done taking liberties at Steffy’s place. Finn made it clear it will no longer be an open-door policy for Liam Spencer.

It looks as if both Hope and Finn may have hit on something here. Maybe both Liam and Steffy secretly don’t want to give each other up. But Bold and Beautiful spoilers suggest Finn will split these two up for good, It sounds like that starts with him splitting the picture right down the middle.

As next week rolls around, B&B spoilers suggest that the photo, which pays homage to Liam and Steffy’s lost love, will end up with Liam’s head going through it. A fight is predicted between Liam and Finn, one that includes their fists. It looks like next week Bold and the Beautiful leaves fans on the edge of their seats if these predictions are as explosive as they sound.