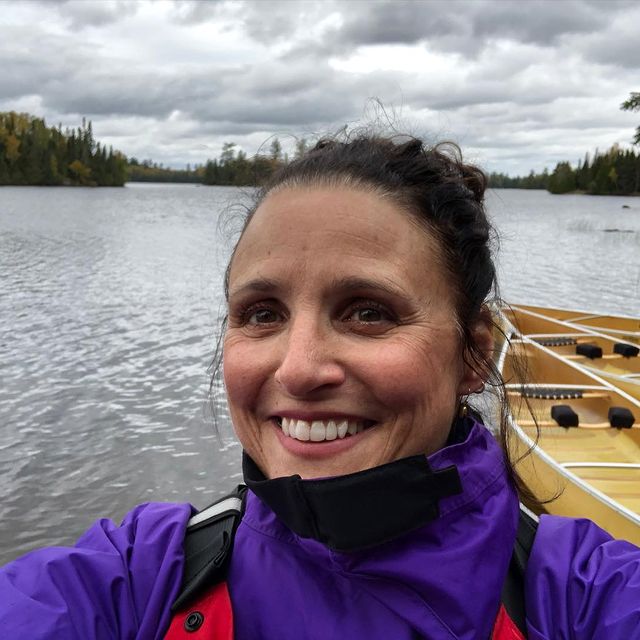 The beautiful Julia Louis-Dreyfus is celebrating her 60th birthday today. The Seinfeld star was born January 13, 1961 in Manhattan, New York. Dreyfus commented on a Twitter post by Andrew Yang who is also celebrating a birthday today.

Hey, it’s my birthday, too! What do you think the Congress is gonna give us for our special day? Happy birthday to us!🎂🇺🇸❤️🎉 https://t.co/XUf6V1qZCo

Dreyfus played Elaine Marie Benes on the sitcom Seinfeld from 1989 until 1998. The famous show about nothing starred famous comedian Jerry Seinfeld as himself. The series follows the neurotic lives of Jerry Seinfeld and his three friends. Elaine Marie Benes is Jerry’s ex-girlfriend and best friend. Cosmo Cramer, played by Michael Richards, is Jerry’s lovable, but wacky neighbor. Jason Alexander also stars alongside as George Costanza; Jerry’s right-hand-man.

Dreyfus showed just how funny she was by her performance on Seinfeld. She is quoted saying, “I have no agenda except to be funny. Neither I or the writers profess to offer any worldly wisdom.”

The series went for nine seasons and is widely accepted as one of the best sitcoms on television. Dreyfus’ fame increased dramatically from her time on Seinfeld. She would go on to star in the sitcoms The New Adventures of Old Christine and Veep, among other movies and television shows.

Dreyfus made an appearance on the talkshow Comedians in Cars Getting Coffee in 2015. Dreyfus and host Jerry Seinfeld drive around in a 1964 Aston Martin DB5 before stopping for a coffee. They reminisce about their days on Seinfeld and what has changed since then.

Dreyfus was diagnosed with stage 2 breast cancer in 2017 during her run on the show Veep. She shared her story in 2018 on Jimmy Kimmel Live! after undergoing chemotherapy.

“We had to stall Veep production because of my situation,” explained Dreyfus. “A lot of people worked for me and I knew I couldn’t really keep it private, because I had to tell everyone what was going on. And then I sort of embraced that. I got a lot of positive feedback.”

Dreyfus chose to find a positive and used her battle with breast cancer as inspiration to discuss the issue of healthcare.

“I think people liked the fact that I had a sense of humor about it and also, I think it’s an important conversation to have about health and healthcare. I very much considered the notion that as someone battling this disease, the idea that I might not have health insurance — which I do, thanks to my great union — is completely terrifying. Healthcare should be for all. I believed that before, now I really know it.”

Julia Louis-Dreyfus has had an interesting 60 years. She is still acting with her most recent film being 2020’s Onward where she voices Laurel Lightfoot. We are sure to see much more come from Dreyfus in the coming years. Happy birthday to Julia Louis-Dreyfus and be sure to check back with TV Shows Ace for more news and updates.

Hallmark’s ‘Christmas At Castle Hart’ Filmed Entirely In Ireland
‘Below Deck’: Fraser Olender On That Steamy Three-Way Kiss
Lala Kent Celebrates Her Daughter’s First Thanksgiving — See The Photo!
What Can We Expect From ‘Love Is Blind’ Season 2 And When Does It Air?
Colin Kaepernick’s 2021 Net Worth Revealed