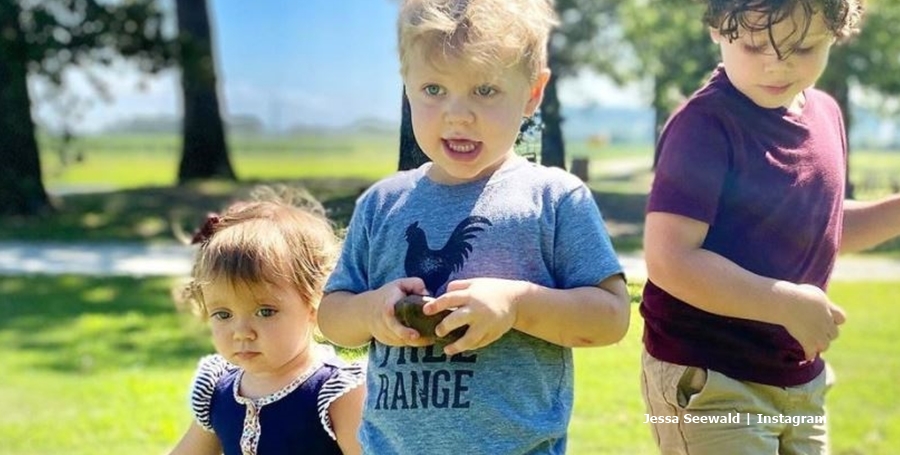 Jessa Seewald’s daughter Ivy brings more fun and personality to her family. She and Ben already raised their sons Spurgeon and Henry before their little sister came along. And fans adore it when the Counting On star shares about the kids. Now, Ivy brought even more cuteness on her Instagram.

In November, we reported that Jessa shared a video clip showing the boys building a couch fort. And little Ivy enjoyed it as well. The cute kid sat inside it and played at peek-a-book from behind the cushions. Jessa’s youngest baby girl seemed very happy and kept poking her head out of the cushion fort. And, her smiling eyes revealed she loved the fun experience.

Now, with boys out the way, Ivy demonstrated that she can get up to mischief without them. Jessa Seewald shared a series of photos about it on her Instagram on January 11. She grows up quickly now. Recall, Jessa and Ben welcomed Ivy about 18 months ago. And Counting On fans suspect that baby number four comes along soon. So soon, she might be a big sister. And, ready to teach any younger sibling how to outsmart her bigger brothers.

Big brothers away, Ivy snacks on their candy

Jessa revealed Ivy slurping away happily on her “big brother’s jawbreaker.” Jessa found her sitting at the counter thoroughly enjoying the tasty treat from Uncle James Duggar. Actually, she looked very self-satisfied. In the comments section, fans expressed how cute they think Ivy is. And others talked about her sweet tooth. One of them wrote, “She looks very pleased with herself! 💕🤣.”

Another fan of Jessa Seewald noted, “Oh candy heaven!” More fans talked about how they adore Ivy’s big eyes and cute smile. Here’s what a few of them said:

As you can see, fans of Jessa Seewald really love Ivy who brings so much cuteness into their lives.

Ben and Jessa take all the kids out in the wilderness

Over on her YouTube, Jessa often shares the family exploring the wilderness. Spurgeon and Henry really love discovering the small critters out there. And since Ivy arrived she also goes along. Usually, Ben carries her in a special pack/harness. Plenty of other videos reveal that Jessa Seewald’s cute daughter Ivy quickly becomes a central focus of life in the family.