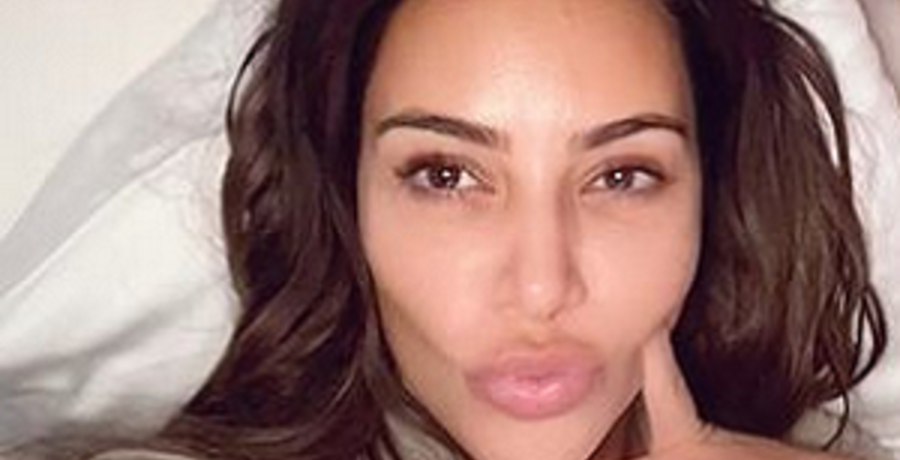 Kim Kardashian put her curves on display in her latest photo. This comes amid the divorce rumors. Last month, People reported that the couple is living “separate lives.” Since then, the rumor mill has been going into hyperdrive.

The Keeping Up With the Kardashians star is ignoring the reports. Instead, she took to Instagram to post a new sexy mirror selfie. In the snapshot, she showed off her curvaceous body. Kim sported the new underwear set from her Skims line.

On Monday, January 4, Kim Kardashian shared a photo of herself wearing a gray bra and matching high-waisted underwear. The 40-year-old pouted at the camera as she snapped the shot. In the caption, she teased the Body Basics launch. But she has since deleted the photo.

On Tuesday, January 5, Kim posted this photo of herself wearing a mauve-colored sports bra with matching high-cut underwear. This time, she wore a long braid as she posed in her dressing room. Kanye West’s wife also appeared makeup-free in this photo. In the post, she announced the launch of the new Body Basics collection.

However, it’s unclear why she deleted the original post. This comes amid the reports that the couple isn’t doing well. Kim and Kanye are living separately. The “Jesus is King” rapper has no intentions on moving back to Los Angeles. He was even spotted traveling in Europe.

The Mirror recapped some of the duo’s issues. Kanye is reportedly living in Wyoming while Kim Kardashian remains in California. Friends close to the KUWTK star claim their relationship is “really strange.” The couple decided to live separately after Kanye’s failed 2020 presidential campaign.

“It sounds like he has no plans to return to LA anytime soon, at least not full-time, but Kim is okay with that,” an insider told Hollywood Life.

The reality star is focused on her kids and her businesses. She spent Christmas with her mom, Kris Jenner, and her sisters. None of her Instagram content featured an appearance from the Yeezy designer. While Kim would like to divorce Kanye, she feels that leaving is not an option.

On Monday, Deuxmoi shared a blind item on Instagram Stories. The message read: “Can 100% confirm that a well known Hollywood couple split over the holidays. Divorce filing will happen soon – within the next 2 weeks. They’re trying to keep it on the DL until then.”

Fans think the blind item has to do with Kim and Kanye. Over the past year, Deuxmoi has established itself as a reputable celebrity gossip account on Instagram. People send anonymous stories and rumors about A, B, and C-list celebrities. However, only time will tell if these rumors are true.

What are your thoughts? Do you think Kim and Kanye are on the outs? Sound off below.

‘Married At First Sight’ Season 12 Kicks Off – What Do We Know So Far?
‘Animal Kingdom’ Renewed for Sixth and Final Season by TNT
Jon Gosselin Reveals He Was In Hospital, Shares Details
Could A ‘One Tree Hill’ Revival Happen?
’90 Day Fiancé’ Exclusive: Tarik Still Has Minty On Speed Dial As He Comes Clean To Hazel