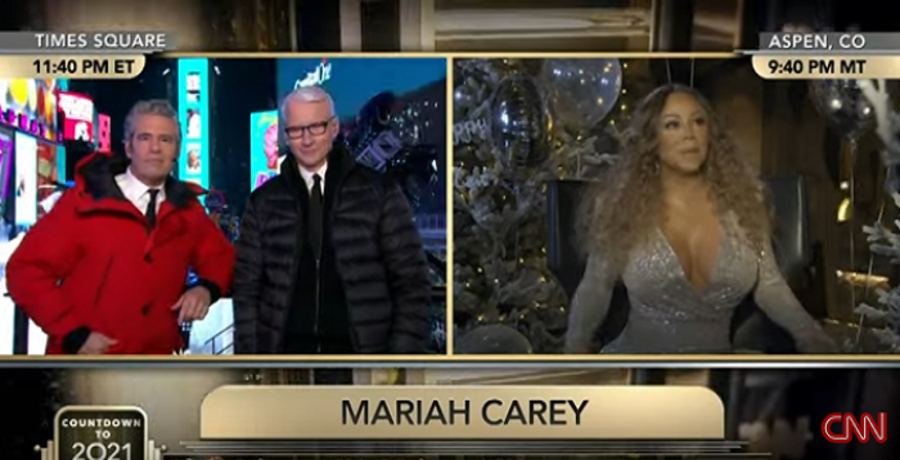 Andy Cohen stirred the pot during CNN’s New Year’s Eve celebration. He co-hosted the event with best friend and journalist Anderson Cooper. The duo interviewed Mariah Carey while Jennifer Lopez performed behind them. At one point, it was hard for them to hear the “All I Want For Christmas Is You” singer speak.

That’s when the Watch What Happens Live host brought up Mariah’s feud with Jennifer Lopez. He was probably hoping for another iconic moment to happen on live television. But instead of a reaction, Mariah just carried on. She didn’t miss a beat even though Andy tried to stir up drama.

On Thursday night, December 31, the singer appeared virtually on CNN’s celebration. In one of the most notable moments of the interview, Mariah could hear music playing in the background. Jennifer Lopez was performing behind Andy Cohen and Anderson Cooper during Dick Clark’s New Year’s Rockin’ Eve broadcast.

“What’s going on in the background, I’m hearing music?” she asked.

“We got J.Lo behind us, actually,” Andy said with a big smile on his face. Anderson just stood there awkwardly.

Mariah sat there aghast in her seat. Her reaction became one of the viral moments of the night. But she carried on with a smile on her face and without acknowledging Jennifer. Instead, she acted like she couldn’t hear them.

Internet reacts to the awkward moment

However, Mariah’s reaction didn’t go unnoticed by viewers. They took note of the awkward moment. As fans know, Mariah and Jennifer aren’t good friends. Mariah has famously said she “doesn’t know” the “Booty” singer. Here are just some of the tweets:

The alleged feud between Mariah and Jennifer goes back to the early 00s. Mariah infamously responded in an interview with asked about the fellow pop star. In her new book, The Meaning of Mariah Carey, she addressed their feud. While she didn’t name Jennifer, she claimed that another “female entertainer” stole one of her songs.

That’s not all that happens. Mariah also called out Andy Cohen for not crediting her for writing the holiday classic “All I Want For Christmas Is You.” While bringing up the chart-topping hit, he claimed that she only “recorded” the song.

“Thank you. Well, first of all, I hate to always say this, but as a writer, I wrote that song,” Mariah corrected him.

Mariah Carey reminding that she even WROTE the biggest christmas song 'All I Want For Christmas Is you" pic.twitter.com/p5OzBI3ZhR

Andy responded, “I know!” Mariah then said, “Yeah, but you said recorded, so I just had to clarify that for the folks at home.” The powerhouse singer never gets enough credit for writing her own songs. It’s no wonder why she has to constantly correct people.

What do you think? Do you agree that Andy tried to stir the pot? Sound off below in the comments section.

Separation Over, Isabel & Jacob Roloff Back Together
Is Natasha Parker Open To Being ‘The Bachelorette’ After ‘BIP’ Drama?
‘DWTS’ Brian Austin Green Gets Support From Ex Vanessa Marcil
Get To Know ‘The Bachelor’ 2022 Clayton Echard
‘RHOBH’: Erika Jayne’s Estranged Husband Tom Girardi Reportedly Living In A Senior Center