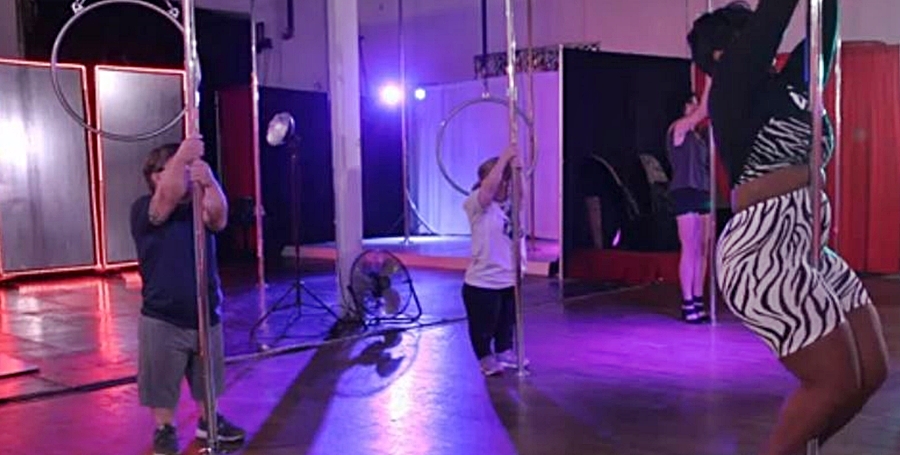 7 Little Johnstons parents Amber & Trent spice up their intimate life in the new season from TLC. The show premiered Season 8 on December 29. Fans saw that they went along for some pole dancing lessons. Actually, it wasn’t unexpected as the teasers earlier promised a lot more about them changing things up. So how did fans react?

We reported ahead of the season, that Trent and Amber take things up to a new level. In the past, they were always open about their relationship. It began years ago when they attended a meeting for Little People. Occasionally, they ran into a few problems as all married couples do. But as Amber said, they always “work it out.” In the new season, fans see them go pole dancing. And, they also build a love shack in their yard.

The 7 Little Johnstons couple, Amber & Trent have really short legs. So fans saw them look a bit hesitant about learning pole dancing. But Trent got them through it with a lot of quite funny comments. At one stage he said, “Can I spin four times around the pole? Probably not. Can I get one good whirl? I hope so, maybe.” Nevertheless, they soon discovered that they could do quite well as they fired up some passion.

Fans react to the season of renewed passion

Most fans seemed to enjoy scenes of Amber and Trent dancing and talking about their love life. With practically everyone at home, it’s hardly surprising they consider a love shack out the back. As one fan on Twitter noted, “I could never bone anyone in this house, there are 127 people in there at any given time.” But another fan commented, “Trent and Amber are couple goals.”

#7LittleJohnstons is the most down to earth reality show on TV. Everyone is this family is likeable.

Meanwhile, on Instagram, more fans commented about 7 Little Johnstons Amber & Trent pole dancing.  Here’s what they said about it:

Trent seemed to pick up the pole dancing technique fast

The person who took the pole dancing class explained that pole dancing’s for everyone. And, she tried to make them both feel comfortable. But she felt Trent took to it a bit easier than Amber. It seemed like 7 Little Johnstons Amber felt a bit inhibited by her shorter legs and arms. However, they both did rather well in the end. Do you agree? Sound off in the comments below.