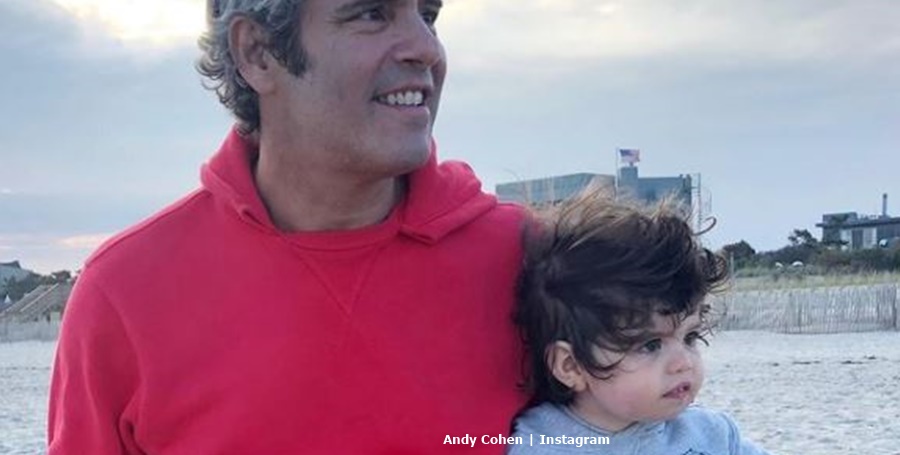 Andy Cohen, as Bravo fans know, is Jewish. So, it’s no huge surprise that he celebrates Hanukkah. This year, his son Ben seems old enough to also enjoy the annual religious event. Hanukkah runs for about eight days and started on December 10. On that day, Andy took to his Instagram and shared a sweet photo of himself holding his son.

Ever since his birth, fans hoped for photos of little Ben growing up. And, Andy certainly delivered on that front. Literally, they see Andy growing as a dad and Ben growing up before their eyes. Sometimes, Ben amuses fans with his antics. We reported that recently, he thought Dolly Parton might actually be God. Well, some of her fans thought little Ben got that right. Or at least, they view her as an angel as she helped with COVID-19 vaccine development.

Meanwhile, other Bravo fans wondered if Andy Cohen explained that Dolly’s not God. Probably, he did. After all, the Jewish dad clearly instructs his son on his faith. Kveller.com reported in June last year, that he is “outspoken about his gay and Jewish identities, and took his first trip to Israel in 2018 for Tel Aviv Pride.” The site also talked about Andy Cohen as the all-time favorite “Jewish dad.” Now, Andy and Ben celebrate the eight-day Jewish celebration known as Hanukkah or Chanukah.

History.com explains all about the Jewish tradition. “The events that inspired the Hanukkah holiday took place during a particularly turbulent phase of Jewish history.” Basically in about 200 B.C, Israel fell under “the control of Antiochus III, the Seleucid king of Syria.” He seemed reasonable and allowed the Jewish people to continue worshiping their own God. However, his rather unlikeable son forced them to worship “Greek Gods.”  If you know anything at all about people like Andy Cohen, their temple’s sacrosanct. Anyway, people got massacred and the temple defiled with “pigs being sacrificed” in it.

You might note that in Andy Cohen’s photo with Ben, they look at a gold-colored candelabrum. Back in the day, when the Jewish people cleansed their temple, they only had enough oil to keep the flame going for one day. But miraculously, “the flames continued flickering for eight nights.” Now, each day, people light one candle, until all eight plus the shamash, or “helper” candle, burn at once. Many of Andy Cohen’s fans love that Andy teaches his son Ben all about these old traditions.

In the comments section, many people commented about the photo. One Bravo fan wrote, “Tradition is so important❤️ this is such a lovely moment! Thank you for sharing😘.”

Another fan of Andy Cohen and Ben noted, “www how sweet ❤️❤️❤️ getting into his Jewish heritage. Happy Hanukkah 🕎 👏🏾👏🏾👏🏾.”

‘Zoey’s Extraordinary Playlist’ Canceled: Can It Be Saved?
UPtv’s ‘The Wedding Ring’ Is The Perfect June Romance
‘Bachelorette’ Fans Wonder What The Heck A ‘Skin Salesman’ Does
OMG!!! Has Meri Brown DUMPED Kody For A New Lover?! [See Photo]
UFC Fighter Challenges Kim Kardashian To A Fight