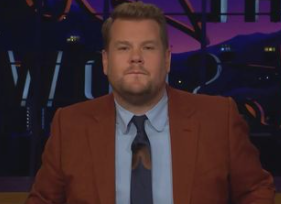 The Prom is the Netflix film adaptation of the 2018, Tony-nominated musical. The Prom is based on a true story. In the movie, Emma, a lesbian student, is not allowed to attend prom with her girlfriend. The school PTA  bans Emma from attending prom. But later the PTA cancels prom altogether instead of allowing the couple to attend.

So, Emma tells her story online and gets the attention of four Broadway A-listers that are currently in desperate need of some good publicity. The foursome travels to Indiana to try and help Emma, but their attempts to help backfires and they have to rally to give Emma and everyone a night to truly celebrate who they are.

With the movie being based on a critically acclaimed musical, headlined by some of the biggest names in Hollywood, and directed by Ryan Murphy a hit seems inevitable. However, the movie is already getting backlash from critics and moviegoers alike.

The focus of the negativity surrounding The Prom is the casting choice of James Corden to play an openly gay character, Barry Glickman. In the show Glickman describes himself as “gay as a bucket of wigs” but he is being portrayed by a heterosexual man. Critics have complained that Corden’s portrayal of the character is “offensive” and “horrifically bad.”

One viewer said, “It’s the way James Corden is playing a walking stereotype of a gay man in The Prom and the jokes constantly take a jab at musical theatre gays.” He continued saying, “Jokes that, [c]oming from a straight man, feel gross.” Corden’s character is flamboyant, which is where most people are taking issue. One person went so far as to say, “It’s a problem to have Corden in gay-face.”

The Prom opened in select theaters on December 4th and will premiere on Netflix on December 11th. And despite dissatisfaction with Corden’s performance, the average score for the movie on Rotten Tomatoes is currently 68 percent.

The viewers and critics have been generally positive about the story and acting of the other members of the ensemble. The cast includes Meryl Streep, Nicole Kidman, and Keegan-Michael Key. Newcomer Jo Ellen Pellman plays the title role of Emma. The performances have been lauded and the story has an uplifting ending.

Based on true events

One thing to remember is that this story is based on real events. It is heartbreaking to know that this happened to a young girl. One of the most important messages in this movie is that everyone was not able to have the “prom experience”. This movie speaks to those individuals. We will see what more viewers will have to say after the full Netflix release.