Born on December 7, 2004 to Kody and Janelle, Savanah is turning 16 in just a few days! While she isn’t super active, she does have an Instagram account. With Sister Wives currently in an off season and no one really sure when the TLC series might return for more, fans turn to social media for updates on the family. Most of the Sister Wives updates come from Meri, Christine, and Janelle who all stay pretty active on social media. So, seeing a fresh post from one of the younger members of the family is refreshing!

Where is Savanah Brown in the the family tree?

First things first, Kody Brown has over a dozen children. So, it makes sense for fans to get confused from time to time. As we previously mentioned, he shares Savanah with his wife Janelle. She is Kody’s 12th child. And, she’s Janelle’s sixth. So, that’s a lot of older siblings to look up to!

We know the Sister Wives teenager created her Instagram account last year. To date, she’s posted on it just 10 times. Given the fact that she’s pretty young and Sister Wives fans can be pretty brutal, it makes sense that she wouldn’t be super active.

That being said, Savanah Brown has graced us with just a few selfies in the year and a half that she’s had her account. And, this includes a really fresh selfie that she posted just yesterday. Now, because she’s unverified (and probably because a lot of fans spell her name wrong) Savanah Brown has a following of just over 1,100. So, it isn’t too surprising to hear her photo didn’t get that much attention. 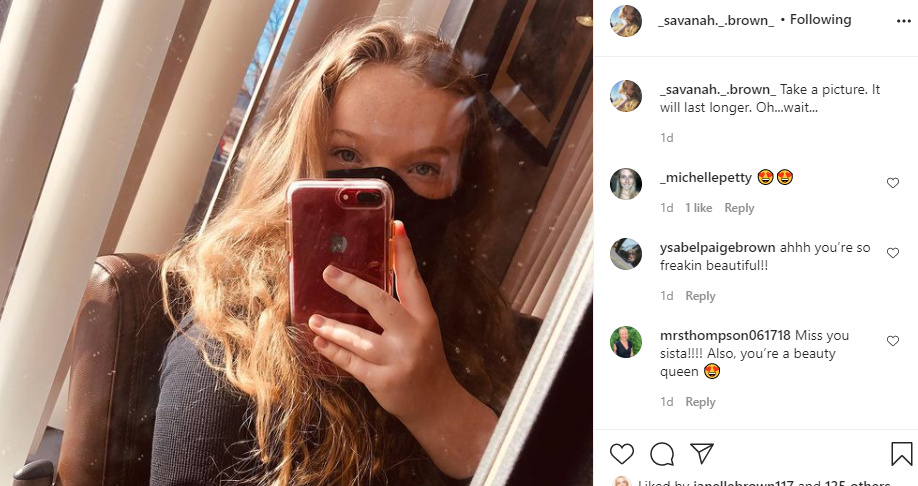 The attention it did get, however, was very positive in nature. Even under a face mask, Sister Wives fans thought she was glowing. They couldn’t believe how beautiful she looked. Especially considering most don’t find her father to be that attractive.

Does she not see her mother’s sister wives that often?

On Reddit, some followers of the show suspect there is some distance between Janelle’s children and Robyn’s. This suspicion is because Ysabel Brown commented on the post. And, she praised Savanah for being beautiful. Sister Wives fans thought this was an odd comment to leave. Unless they weren’t very close. Perhaps the children were not seeing much of each other these days. It could just be social distancing because of the virus. But, fans have long suspected a rift between Robyn and the other wives.

Are you surprised to see how grown up Savanah Brown is looking these days? Share your thoughts with us in the comments.

‘My 600 Lb. Life’ Carrie’s Husband Chris Willing To Do Anything To Get Wife Back
Is Christine Brown Posting Selfies Of Someone Else On Instagram?
Tori Roloff Talks About ‘Madness’ In Her Life
What Do We Know About The Future Of ‘Bringing Up Bates’?
‘Below Deck Med’ Hannah Ferrier & Fiance Are Instagram Official