Former Bachelorette Trista Sutter went to social media this past weekend to talk about her and Ryan’s recent struggles. She asked for prayers from their followers. While they were thankful to learn Ryan does not have lymphoma, they still want answers. A mysterious illness has been plaguing Ryan for months with no diagnosis. Tuesday, Ryan spoke out and addressed their followers.

Ryan went to Instagram to share more details on his mystery illness. In Trista’s post, she didn’t reveal specifics. She simply said his symptoms aligned with lymphoma, which proved negative.

Ryan started his 3 post explanation with a photo of the road ahead of him. He went on to say he doesn’t want to dwell on the situation. However, he feels obligated to share his story when so many have shared theirs with him.

He said it all started in February. He began his fire fighter career again and attended an 18 week academy in Denver. Ryan said, “Towards the end of that process I felt more and more worn out and began feeling occasional “flu like” symptoms.  I was tested for COVID multiple times but never tested positive.  I completed the academy and believed/hoped I would begin to recover and feel better.  It’s been five months now and, if anything, I feel worse.” 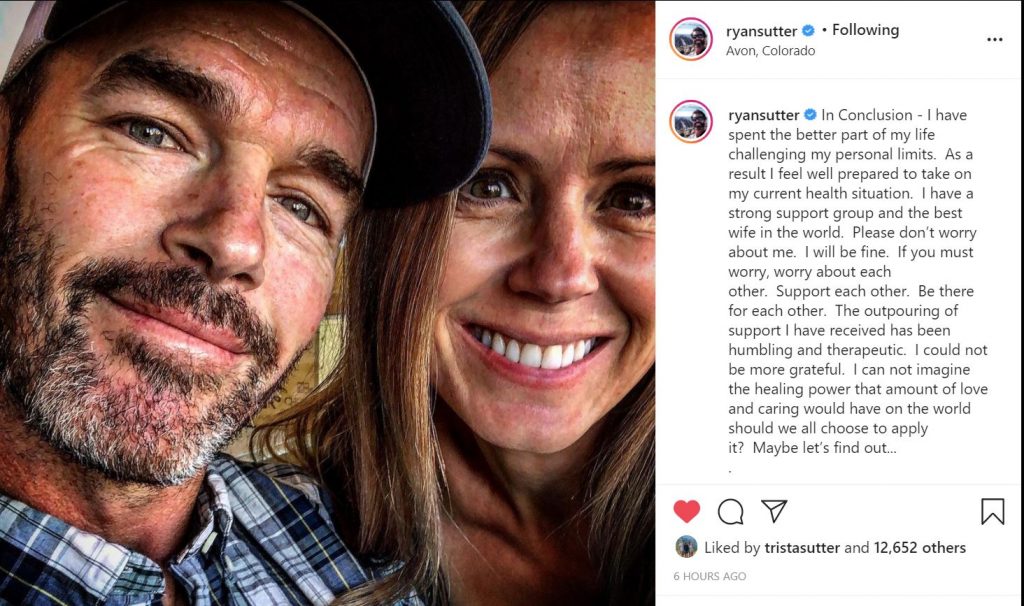 He said, “Though I am functional and continue to work my regular fire schedule, I am experiencing a battery of symptoms which include:  fatigue – sometimes almost paralyzing, deep body and muscle aches, fevers, night sweats, full body itching with no rash, headaches, neck and throat swelling, congestion, light headedness, nausea, and just general all around not feeling good.  I have had several blood tests and a CT scan.  I have a high ANA Titer and low WBC but nothing else has proven anything conclusive.”

He went on to say he doesn’t believe whatever ails him is contagious. Nobody in his family has gotten sick nor has anyone he works with. Ryan said most days he feels 70% and some days he can’t get out of bed.

In Ryan’s next post he shared a photo of himself. He said, “Take Aways – I appear to be sick for some unknown reason.  I do not appear to be alone in this experience.  The number of people who share a similar story to mine is incredible.  The struggle to find answers in the medical world and support through the insurance industry is frustrating and lacking.  One must truly and persistently advocate for himself/herself if they hope to find answers or, at the very least, rule out possibilities.” 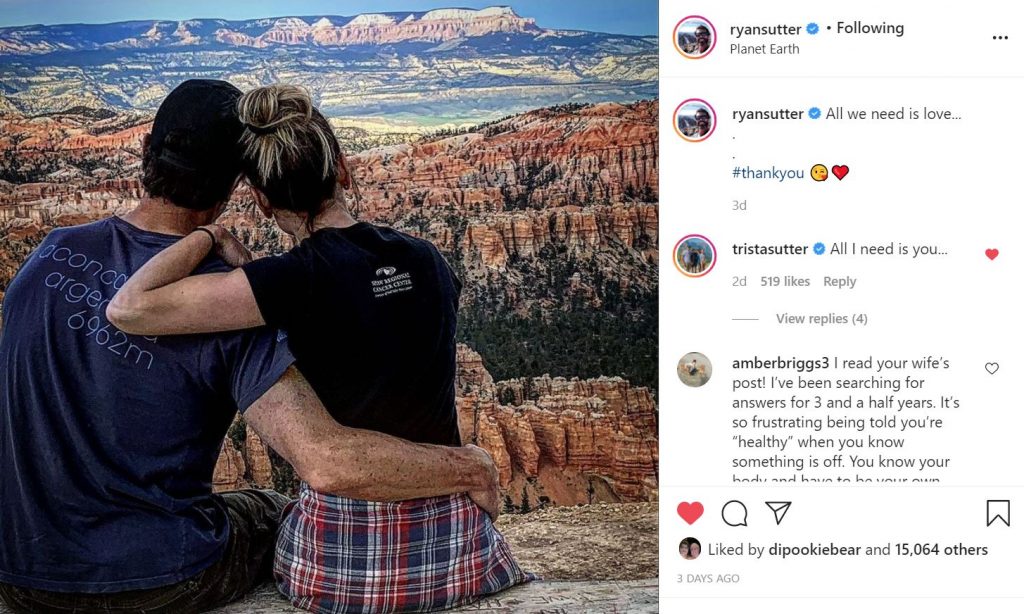 He continues to seek answers

In Ryan’s last post he shared a photo of himself and Trista. He said, “In Conclusion – I have spent the better part of my life challenging my personal limits.  As a result I feel well prepared to take on my current health situation.  I have a strong support group and the best wife in the world.  Please don’t worry about me.  I will be fine.  If you must worry, worry about each other.  Support each other.  Be there for each other.”

He went on to say the outpouring of love and support has been humbling and therapeutic. He concluded his post saying, “I can not imagine the healing power that amount of love and caring would have on the world should we all choose to apply it?  Maybe let’s find out…”

Numerous fans spoke up for Ryan and offered suggestions for possible testing based on their own symptoms. Many possibilities were given including, ALS, Lupus, Fibromyalgia, Lyme Disease and many more.

Hopefully, Ryan can find answers soon and get to feeling better.

Trista first broke news of his mysterious illness this weekend. She shared how normally this is her favorite time of the year, but they are struggling. She knows she has much to be thankful for, but Ryan being ill is taking a toll. They are hoping to find answers and get him back on track to feeling well.

Ryan also went to Instagram Stories to share more about his journey. He said, “I can tell you that I’ve been sort of feeling this way for several months and that Trista and I have looked into lots of things, continue to look into things, everything from Lyme disease to immune disorders, autoimmune disorders, viruses, bacteria’s, cancers and all sorts of stuff, hoping to find, hopefully, a simple solution or a solution at all.”

Ryan continued, “I sympathize with everybody going through this type of situation. It’s new to me, but there’s a lot of people, it turns out, that it’s not new to and it’s hard, it’s definitely hard.”