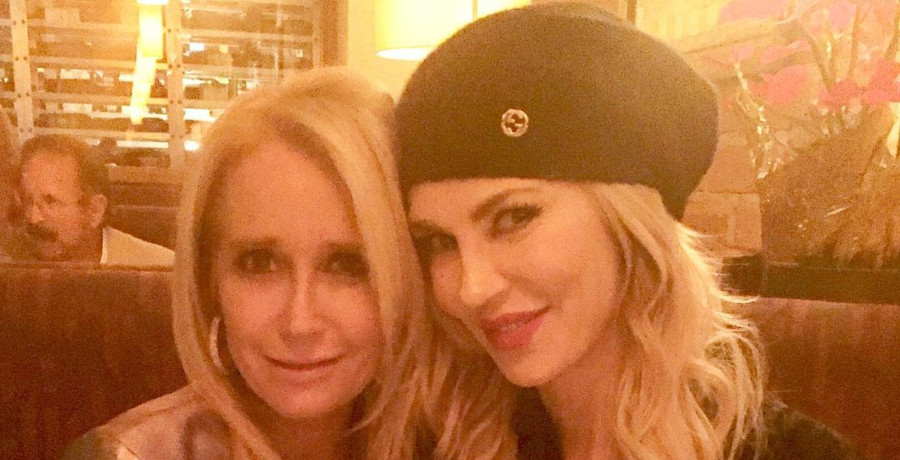 The Real Housewives of Beverly Hills alum Brandi Glanville isn’t fazed when it comes to rumors about her. After her time at the epicenter of a huge scandal, along with her years of reality TV, nothing seems to rattle her. If you recall, actor Eddie Cibrian famously cheated on her with singer LeAnn Rimes, later divorcing Brandi and marrying the “Blue” crooner.

However, a recent rumor about the Drinking and Tweeting author has caused a rift in one of her close friendships.

Kim Richards Not Speaking to Brandi Glanville After Hook-Up Rumors

The more recent rumor involves RHOBH alums Kim Richards and Carlton Gebbia. Brandi Glanville immediately shot down the rumor, but she believes she knows where it came from. Around the same time, she shared a photo of herself with Kim and Carlton. She revealed on her Unfiltered podcast that she thinks that’s where it started.

But on Twitter two weeks ago, she put the blame firmly on Denise Richards’ camp. She tweeted a plea to the Wild Things star’s PR team. In the missive, Brandi Glanville BEGS them to stop feeding “untruths to blogs.” She also said it was “hurting” her friendships with the two women.

On the same recent podcast episode, Brandi spoke out again about how the rumor is damaging her friendship with Kim Richards. In fact, she said that Kim “is still not talking to me” over the rumor.

Brandi Glanville Confirms She ‘Fooled Around’ With RHOBH Co-Star

Fans may not even remember Carlton Gebbia off-hand. She was only on the show for one season, Season 4. During her time on the show, she may have put a spell on Kyle Richards. While Brandi and Carlton quickly became friends, viewers weren’t won over and Carlton wasn’t asked to return for another season.

Brandi revealed that she had a “wild night” with Carlton and another man, whom Brandi doesn’t name.

In addition to Drinking and Tweeting, Brandi also hit the Times’ Bestseller List with Drinking and Dating. Both books were released in the early 2010s. Is it time for Brandi to release a new book? She thinks so. But how far should she go this time?

She revealed to podcast listeners that she already has one chapter in mind for her next book. According to the RHOBH star, “The Emails I Never Sent” is a “good chapter” full of tea.

But she isn’t sure just how much tea she’s ready to spill, per Reality Blurb. She teased fans, “Is this my tell-all? …Is it time for that book right now?”

It remains to be seen if Brandi will release a Tell-All any time soon. If she did, would you buy it? Let us know your thoughts in the comments down below. None of the three – Brandi, Kim, or Carlton – are still on the main RHOBH cast. Brandi and Kim make appearances sometimes.

The new season of The Real Housewives of Beverly Hills likely won’t be out until 2021. Especially after positive coronavirus cases caused production to shut down last week.