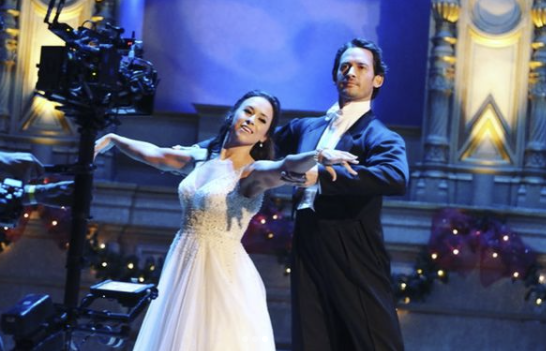 Are you excited about Hallmark’s upcoming Christmas season? You should be. Christmas Waltz in particular has everyone excited. As we previously reported, this film is a fun mash-up of Dancing With The Stars with some Hallmark-added holiday cheer. It premiered on November 28, but you can catch it multiple times this winter. You can even spot a former Dancing With The Stars champion!

Dancing With The Stars: Juniors only lasted one season, but everyone enjoyed seeing young children compete on the show. Skateboarding extraordinaire Sky Brown teamed up with junior pro JT Church and took home first place. DWTS pro Alan Bersten mentored them and helped them get there. And now, you can catch JT Church in the Christmas Waltz alongside Will Kemp and Lacey Chabert.

The Christmas Waltz Cast And Crew All Adore JT Church

Christmas Waltz stars Kemp and Chabert both agreed that JT has a lot of talent. They recently sat down with TV Insider to discuss.

“The kids we performed with were just spectacular. I was blown away by JT Church,” Kemp said. Many viewers would definitely agree.

“I was amazed every time he danced. I would have to stop and watch. This was his first film, and he did such a wonderful job as an actor. It reminded me of when I was acting as a kid,” Chabert added. You may remember her from her role as Gretchen Wieners in the iconic teen comedy, Mean Girls.

“This is a very talented young man with an incredible future. I’m still out of breath, guys. Get this old man a drink, put his slippers on, and make him sit down,” Kemp joked.

If you loved JT in the Christmas Waltz, you can still check out his old Dancing With The Stars performances on YouTube. His Moana routine was adorable!

Be Sure To Catch This Great Film Again And Again

If you missed Christmas Waltz, don’t worry. You still have plenty of chances to catch up. Here’s when you can catch the fun film on the Hallmark channel, all times are Eastern time:

If you already watched it, let us know what you thought in the comments. We always want to hear what you have to think. Many fans loved Lacey Chabert’s performance so much that they hope she will appear on Dancing With The Stars herself someday.

And it wouldn’t be the first time a Hallmark legend appeared on the dance competition show. Candace Cameron Bure competed with Mark Ballas back in Season 18 and earned 3rd place. However, Chabert is pretty busy with her Hallmark films, so we will just have to see.

Keep following TV Shows Ace on social media for more stories like these. We love telling you about all the latest Hallmark films.