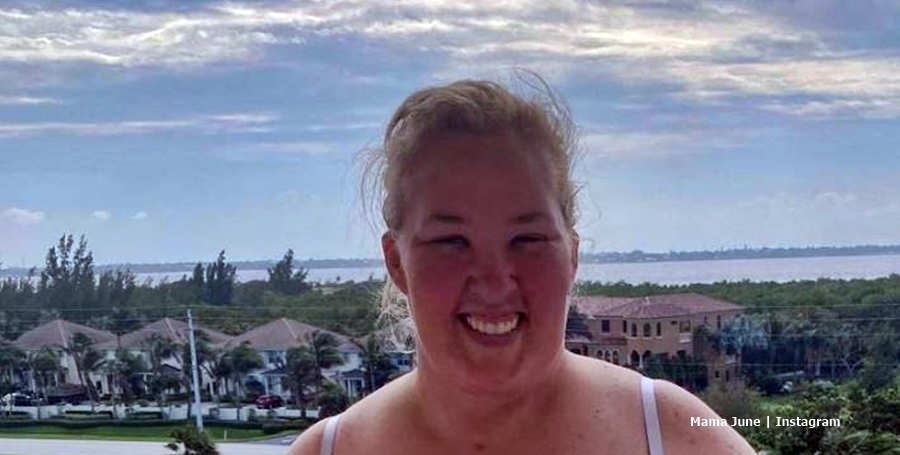 Mama June Shannon celebrated 10 months of sobriety this week. WEtv fans of Mama June: From Not to Hot know that she and Geno went into rehab for their drug addictions. Since then, they lived in Florida and with the help of her friend Adam Barta, they seem pretty good. Now, she featured on the Sober Nation Podcast.

We reported that June Shannon reaches out to other addicts these days. At least she uses her platform and large following to help others. In fact, on one occasion, she reached out to a follower who lost a child from drug addiction. Fans like that she works on her sobriety and also cares about other people these days. After all, her fall from grace was swift and not a pretty reality. Recall, during the last season of the WEtv show, she admitted to spending about $2,400 daily on their habit.

On November 24, Mama June took to her Instagram and said that she celebrates 10 months sober. Her caption read, “What I live by everyday it’s so true and Friday we…[celebrate] 10 mths clean.” Then, she thanked Sober Nation for “the opportunity to share” her story. And she directed her fans as to where they can find the entire podcast. As a footnote, she reminded her followers that she’s always “there” for other people who struggle with addiction.

Over on the podcast website, Jonathan Sylvester reminded viewers that the show was brought to them by “Sobriety Engine.” June said that she started using drugs in about 200o. But later, she stopped without the aid of rehab. But then she returned to Hampton and started mixing with the old crowd. And so she got back into it. Clearly, the company people keep helps influence whether people use drugs again or not. But Geno Doak and June thought about quitting in 2015.

Mama June said though, that by 2016 she used more and more cocaine. And, it was available easily enough. June felt it gave her the confidence to contribute to her production team. And, she admits that her kids knew about it. In fact, she told them in case something happened, so they knew what was going on. June claims that her daughters never saw her use it, but they “knew what was going on.” But Pumpkin hated that she used drugs.

June talked about how she and Geno got “busted” in Alabama. But when they got out, their drug use continued. And, June admits she sold her house and planned on enjoying life in the casinos. Of course, that’s when the media picked up the story and started publishing everything she did. Later, fans saw some of that on Family Crisis.

Mama June spoke for some time about her addiction and recovery. If you want to listen to the whole thing you find it on this link: Sober Nation Podcast.

What Do We Know About The Future Of ‘Bringing Up Bates’?
‘1000-LB Sisters’: Doctor Procter Slams Tammy
Sexy Silver Fox Maurice Benard Sends ‘GH’ Fans Swooning
‘Mystery At Blind Frog Ranch’ Chad Ollinger Exclusive Interview On Mormon Gold And The Mysteries Of Utah
How Much Did Justin Duggar Pay For Home From Jim Bob?