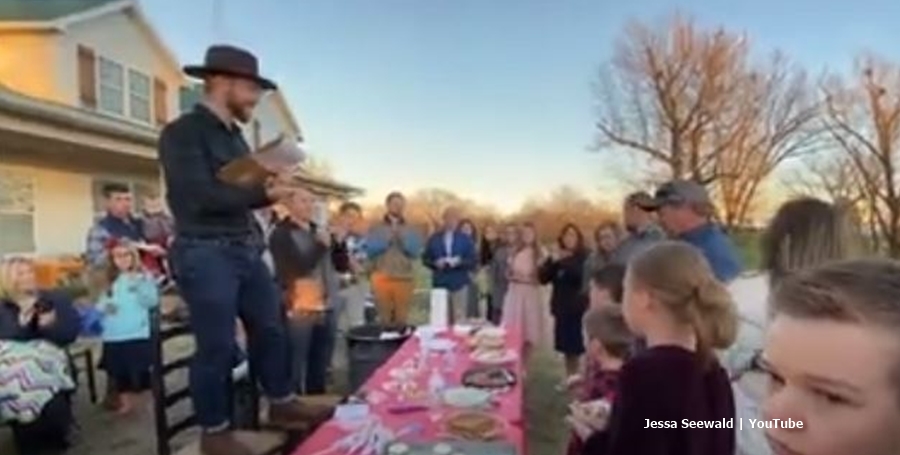 Like most people in the USA, the Duggar family celebrates Thanksgiving.  They also celebrate fall in a long-lasting series of festivities. Some Counting On fans wonder about their traditions. And they know that Christmas is rather low-key. But, Jessa Seewald shared on November 24 about their Fall Festival this year.

We reported that last year, the Duggar family shared a series of photos at Thanksgiving. Clearly, they love it when the family gets together. And this year, they went all out for their Fall Festival. Duggar fans know that the family mostly sticks to religious holidays. But when it comes to fall and Thanksgiving, they get together and really enjoy themselves.

A few years ago, Romper noted that as the family grows bigger and bigger, they probably need a bigger table. Well, according to Jessa Seewald, they set up lots of tables outside for their Fall Festival this year. The TLC family also had plenty of treats to eat. Jessa said they had a  pie competition, and Ben was one of the judges. Apart from that they made kites, had a wood-splitting competition, and more.  Ben said he “never judged a pie-making competition before. ”

Kids enjoyed playing with a pen and pencil wall, which you can see in the video below. Plus, they ate caramel apples. Spurgeon wanted to dip it in the sauces more than once. But, Jessa cautioned him about that. While the boys went off to make kites, little Ivy played with a ball on the lawn. Then, Jessa revealed that the Duggars enjoyed “pumpkin painting.” But, Ivy preferred to give her pumpkin to her grandma, Michelle Duggar.

The Duggar Fall Festival looked rather like a private fair without the rides. Other games were set up as well. But first, the kids finished making their kites and decorated them in colors of their own choice. After the kids flew their kites, Jessa Seewald’s husband Ben and a panel of judges taste-tested 11 pies. They looked very yummy. In the “kid’s category,” Ben announced the “peanut butter pie” took the win. And, the main prize went to a pie that the judges pretty much ate up completely.

The hayride appealed to Spurgeon

After all the pumpkins and pies were judged, and other games, the Duggar family went for a hayride. Spurgeon felt a bit important as he went on one before. As the sun set, the kids all sang songs, and firecrackers went off. And, the kids enjoyed singing their Christmas songs. It certainly looked like a whole lot of kids would sleep well after their fun-filled day.

In the comments, Counting On fans loved that Jessa Seewald shared their special day with them. One TLC fan wrote, “This looks like a blast! Family fun, games, great homemade meals, and memories. Thanks, Jessa and Ben for sharing this moment.”