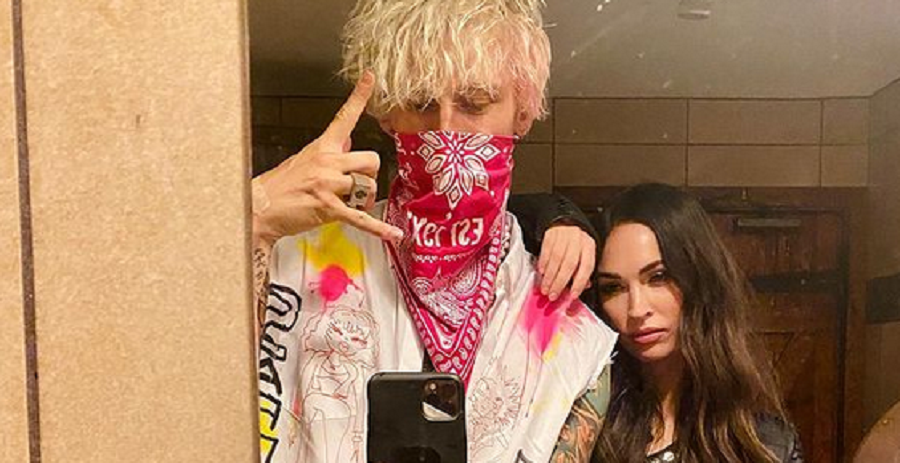 Megan Fox and Machine Gun Kelly became red carpet official. It’s their first debut as a couple. The Transformers star held onto her boyfriend as he walked the red carpet for the American Music Awards on Sunday night. Fox and Kelly posed for photos.

The actress looked sultry at the event. She wore a green dress that featured cut-outs. As for Kelly, he wore an open white shirt with matching pants. He accessorized his look with silver combat boots. The couple also wore matching expressions on the red carpet.

Both Megan and Kelly gave their best smolder to the cameras.

Machine Gun Kelly shows a rare photo from the event

The photos of Megan Fox and Machine Gun Kelly on the red carpet immediately went viral on Sunday night, November 22. The couple made their debut on the red carpet at the 2020 American Music Awards. This cements the next step in their relationship. As fans know, Fox and Kelly have been dating for months.

The relationship comes amid her split from ex-husband Brian Austin Green. Her new beau took to Instagram to share a candid photo from the awards ceremony. The black-and-white shot showed her holding Kelly’s hand as she smiled at his camera phone. Kelly looked over at her as he snapped the mirror selfie.

“Slept next to a shotgun til she came into my life,” Kelly captioned the rare photo. “btw me and Trav performing on @amas tonight.”

The behind-the-scenes photo showed the couple getting ready for the show. Kelly performed his new single with Travis Barker. He also included a shot of himself with the Blink 182 drummer. Kelly and Fox started dating over the summer after they met on the set of their upcoming movie Midnight in the Switchgrass.

They went public after a Los Angeles paparazzo took photos of them together. Fox is still married to Green. The couple has since gotten serious after introducing their children to each other. According to insiders, it’s “not just a fling.”

“They are in a committed relationship and it’s not just a fling. They are planning a future together,” an insider told People.

The insider added that Kelly and Fox “spend as much time together as they can and are doing great.” However, it’s unclear when Fox will finalize her divorce to Green. But it seems like she’s crazy about Kelly. She even got a tattoo in honor of him.

She is cementing their relationship in ink. The 34-year-old actress debuted her new tattoo at the AMAs. Some fans believe it’s a nod to Kelly. Fox’s new collarbone ink reads “el pistolero.”

“We finally have a close-up of Megan’s tattoo and it says ‘el pistolero,’ which is Spanish for the shooter aka machine gun Kelly!” one fan tweeted.

we finally have a close up of megan's tattoo and it says 'el pistolero' which is spanish for the gunman aka machine gun kelly!!! my fucking heart pic.twitter.com/BsFuY2lkuh

Other fans noted that the Spanish translation could also be a nod to the fact the two met in Costa Rica. However, the Jennifer’s Body star hasn’t commented on it on social media. Both Kelly and Fox are no strangers to tattoos. The couple loves getting tatted up, whether alone or together.