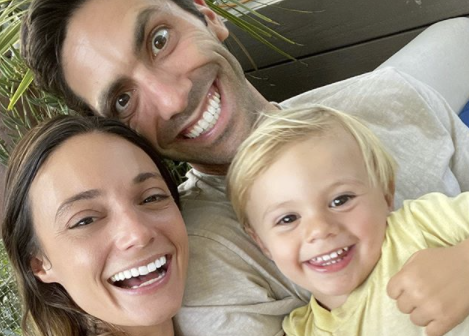 There is only one episode left in Dancing With The Stars Season 29. Catfish host Nev Schulman is one contestant many viewers think could win it all. But what will he do when the competition ends? According to Us Weekly, Nev wants to have another baby with his wife, Laura.

“I’m sure Nev’s very excited to have a moment to reconnect with his family he’s been gone from,” his dance partner, Jenna Johnson, told Us Weekly.

“I’m excited to start trying for baby No. 3 myself. Now’s the time!” Nev happily replied.

Nev and Laura have been married for 3 years and have two sweet children together already. Their daughter Cleo is 4 and their son Beau will be 2 in a few short months.

“It’s just so fun when the kids come into the bed in the morning,” the Catfish host told Us Weekly in a previous interview. “They’re at the perfect age right now where we can be super silly and snugly. So, we were just having fun hanging out.”

Everyone On DWTS Is Baby Crazy

Nev’s partner Jenna has baby fever too. She is married to DWTS castmate, Val Chmerkovskiy.

“I want kids,” Jenna told Us Weekly in a previous interview. “I want babies. Val wants babies very badly. We definitely have spoken about it. That’s our future. That’s what we want when that’s gonna happen.”

Several of Jenna’s castmates had children this year, so she’s likely thinking about babies a lot these days. Artem Chigvintsev became a father over the summer. Lindsay Arnold had her daughter on November 2, and Witney Carson is due in January.

It’s definitely a big year for Dancing With The Stars babies! Perhaps all the little ones can take dance lessons together.

Contestants Prepare For The Big Finale

The Dancing With The Stars finale is on Monday night. Nev and Jenna easily made it in, but their competition is fierce. The other competitors are:

At this point, it’s anyone’s game. But Kaitlyn and Nev have alternated the first place spot since the competition began. Nev currently holds the top spot at 285 points total and an average of 25.9 points. But Kaitlyn is hot on his heels at 283 total points and an average of 25.7. America will ultimately decide who takes home the Mirrorball Trophy.

One thing is certain though — Nev and Jenna won everyone over with their amazing Contemporary piece last night. You can check that out right here:

Who do you think will win? Leave your opinions in the comments below. Be sure to tune in to ABC at 8 PM eastern time on Monday night to catch the exciting finale.