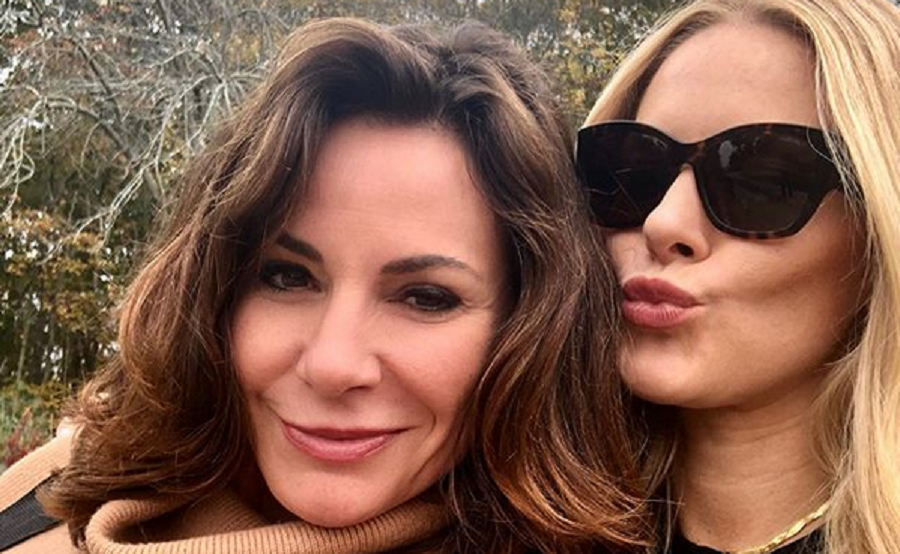 Luann de Lesseps and Leah McSweeney got tattoos together. On Friday, November 13, the Real Housewives of New York star shared a photo of herself at a tattoo shop. But the photo came as a shock to fans. As far as fans know, Luann doesn’t have any tattoos.

She is the Countess and the queen of class, after all. Viewers also recall when some of the RHONY co-stars scoffed at Leah’s tattoos last season. Now, it looks like Luann is interested in getting one. She seemingly got her first one at the tattoo parlor.

Read on to learn about their candid moment together.

Did Luann de Lesseps really get her first tattoo?

The RHONY star shared a photo of herself at the tattoo shop on Instagram. In the photo, you can see a tattoo artist wiping down her arm. In the caption, Luann jokingly wrote: “Who said ‘I’m cool & not like all uncool? #fridayfun #rhony #bravotv #tattootime.” However, Luann didn’t share the photo of her tattoo.

It looks like she got a small tattoo on her forearm. But then she took to her Instagram Stories to share a photo of a large tattoo that reads: “Life is a Cabaret.” In a follow-up post, Luann added the laughing and crying emoji and confirmed it wasn’t her actual tattoo.

Luann de Lesseps wasn’t alone. Fellow Housewife Leah McSweeney was also there with her. She got a tattoo to commemorate her late grandmother. The new ink is on her right hand and simply reads, “Marie” in cursive. Back in October, the fashion designer announced that her grandmother passed away.

Last season, Luann and her co-stars were shocked to learn that Leah had many tattoos. Some of them thought that tattoos were tacky. Leah proudly showed off some of her tattoos. They were shocked to see one on her backside.

“I don’t talk to people with tattoos,” Ramona Singer revealed in her confessional back in April. “I’m not sure what a tramp stamp is, but it doesn’t sound very nice.”

“When I was growing up, people with tattoos were going to kidnap you,” Dorinda Medley said in her respective confessional.

Leah admitted she was “not that offended” by their remarks. She added, “It’s not the worst thing that someone’s ever said to me.”

This comes after Luann de Lesseps sparked the romance rumors. She is trying to move on from her former marriage to Tom D’Agostino. As per the Daily Mail, the Bravo star was seen going to lunch with her personal trainer, Garth Wakeford, on Tuesday, November 3. The pair went to a small eatery located in East Hampton.

Garth works with Luann to get her to stay in shape. Over the summer, she shared some sizzling bikini photos of herself on Instagram. Maybe dating her personal trainer will help Luann get her groove back. She’s been doing better mentally since she worked on her drinking problem.

What are your thoughts on Luann getting a tattoo? Sound off below in the comments section.

Jinger Vuolo Reveals She Was Ready For A Change
Duggar Cousin Amy King Urges Anna To Stop Being Silent & Tell Her Story
Ashley Iaconetti Of ‘BIP’ Shared What Scared Her Early In Pregnancy
Paris Hilton Joining ‘RHOBH’ Would Be ‘Hunky Dory’ With Fans, But Will She? Kathy Spills All
Isabel Roloff Gets Real With Fans, Opens Up About Forgiveness