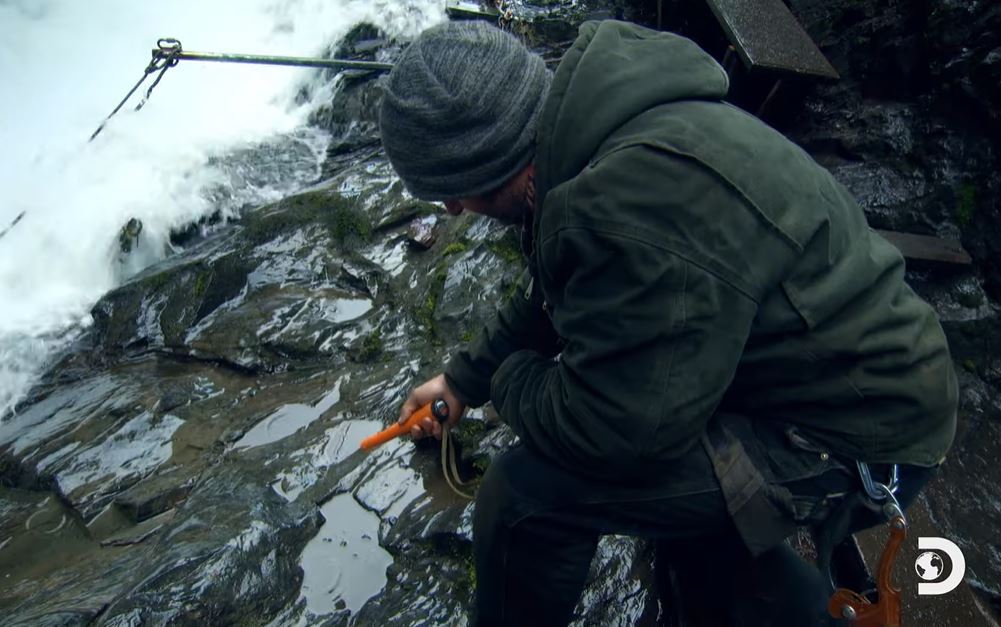 Discovery’s hit series Gold Rush: White Water is finally back and we have missed the icy plunge pools o’gold, as Dakota Fred is still shaming men half his age with his stamina and overall fitness, and his son Dustin is hot on a streak of finding big chunks of gold in the bottom of a raging creek that can sweep you off your feet.

But we learned that Fred is hanging back home in Oregon in the beginning thanks to COVID, as his concerns are about staying healthy.

TV Shows Ace has the exclusive clip from Gold Rush: White Water premiering tomorrow on Discovery Channel. It’s more exciting than ever. It shows how James who is part  of the crew that includes James Hamm, Carlos Minor, Wes Richardson and Dustin Hurt, has discovered flood gold which is hidden in crevices and smaller pools above the rapids.

A late start to the season shortens the Dakota boys’ mining window and with record snowfall melt the crew faces the most dangerous conditions ever. Dustin Hurt picks up right where he left off at Rockfall Ravine, while Fred’s future diving for gold lies in the balance.

There has been mining for 120 plus years in Haines, Alaska and Dustin is into his 6th year of actual mining in the water. He wants the big gold and Dustin believes he is on the edge of a huge windfall and wants to rake it in.

They try a new tactic with explosives, as Hurt describes the new techniques as “game changing” in the extended trailer.  The men set off explosives underwater as the boulders split and reveal quarter sized nuggets. “Half-ounce nuggets everywhere,” according to a hopeful Dustin.

But after a pandemic has shut down the world, they have no time to spare. Father and son are both hunting for gold. Dustin says it maybe Fred’s last season up at the creek site in Haines, Alaska

For five seasons the Chilkat Mountains have seen both Fred and Dustin, but this season Fred is delayed. The crew has less than 100 days to work. Dustin reunites the band, Wes Richardson, Carlos Minor, and Paul Richardson plus James Hamm. There is a gold vein that has over time deposited the gold in plunge pools, as last season at McKinley Falls, Dustin reaped huge gold nuggets. They even found a one ounce nugget. He believes they can beat last year.

Fred Hurt is now 76 years-old and he is cautious about COVID. Fred hangs back in Oregon in the beginning of this season. He knows that he’s in the danger zone for the virus.

Tune in this Friday to see how big the gold is coming up from the rocks below the freezing rapids: