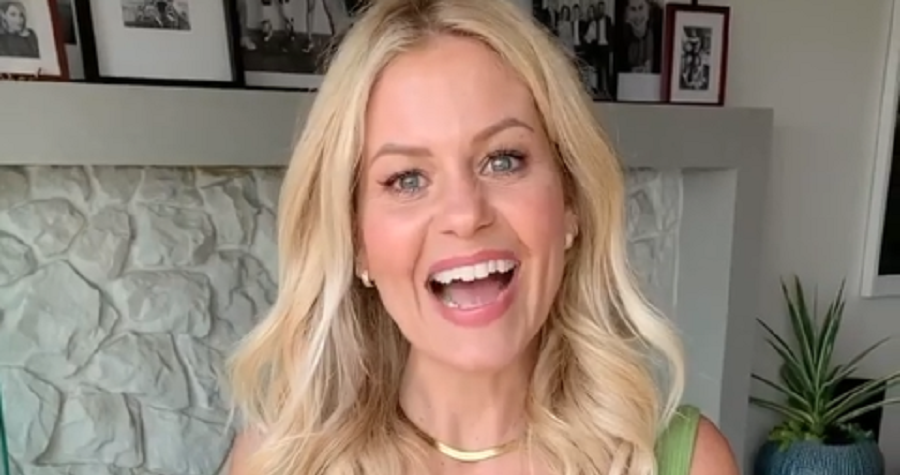 Candace Cameron Bure posted a “spoiler alert” on her Instagram Stories. The Fuller House star said she knew Bob Saget was the Squiggly Monster. This upset a lot of viewers who innocently came across the clip on social media. They didn’t expect to find the spoiler on Candace’s Instagram.

Like everyone else, she watches The Masked Singer. But now she’s calling for kindness after receiving backlash for spoiling last week’s episode. She was right that Bob Saget was hiding under the Squiggly Monster costume. However, fans weren’t happy that she spoiled it before the episode aired.

The previous episode of The Masked Singer showed the remaining singers of Group C, including Squiggly Monster himself. Candace Cameron Bure recognized the voice when he took the stage to sing “(I Can’t Get No) Satisfaction” by The Rolling Stones. During that episode, she revealed on her Instagram Stories that she knew who was hiding underneath that mask. She even captioned it as “Spoiler Alert,” so her fans could avoid it.

“Who watches The Masked Singer? If you do, spoiler alert, fast forward. Spoiler alert,” Candace warned before speaking her piece. Then, she revealed that she could recognize her Full House co-star Bob Saget was Squiggly Monster from “the second he sang the second notes.”

She admits she was holding onto this secret ever since she saw Squiggly Monster perform “Have You Ever Seen the Rain” by Creedence Clearwater Revival during the October 28 episode. Of course, Candace was right. At the end of last week’s episode, the Squiggly Monster got the boot. Bob revealed himself to the audience, panelists, and viewers at home. In an interview with Entertainment Weekly, he said he had to keep his secret from Candace after signing a “legal document.”

Apparently, Candace Cameron Bure upset a lot of her followers by spoiling the previous episode of The Masked Singer. She addressed the criticism in a new Instagram Story, according to Outsider.com.

“I’m going to blame it on the election, but people are just mean tonight,” she said. “People like, first of all, I’m sorry if I ruined it for you. But I wrote and said, ‘Spoiler alert, spoiler alert. Fast forward if you haven’t watched The Masked Singer.'”

She said that some of her followers told her to “get a life” after she revealed Bob Saget’s identity. “We’re just going to chalk that up to election anxiety or something,” she said. “Be kind.” What are your thoughts on the criticism? Do you think it was warranted? Share your thoughts below in the comments section.

In the meantime, The Masked Singer airs Wednesday night, November 11 at 8 p.m. on FOX.