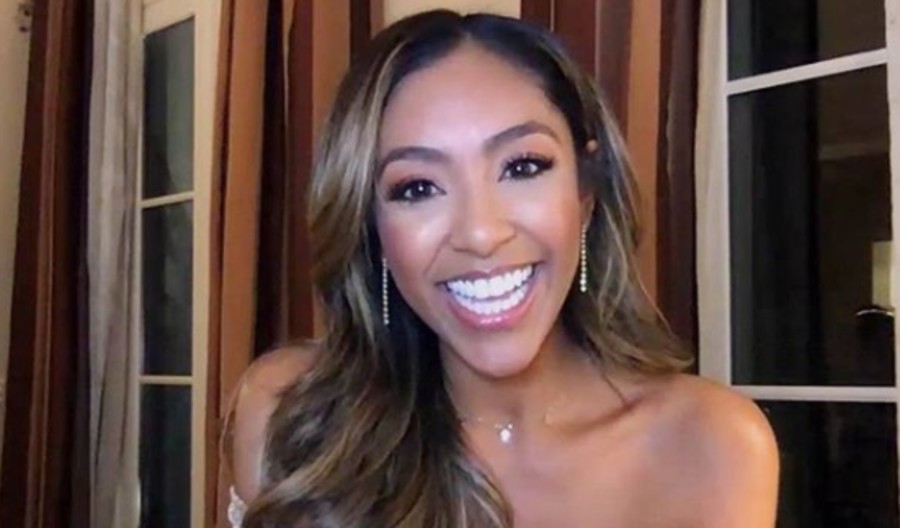 The promo for The Bachelorette from two days ago shows Clare Crawley and Tayshia Adams texting back and forth smiling. Fans are wondering why Clare is showing up in the promos when it’s Tayshia’s turn.

The promo is Clare texting Tayshia. She says, “good news, I met the love of my life.” She said, “that is good news, maybe I’ll be next.” Clare responds, “there are some amazing guys in Palm Springs, I hear.”

What Are Fans Saying About The Promo?

Clare left the show after falling in love with and getting engaged to Dale Moss. Tayshia Adams came in to men who were there from Clare and it’s not clear how they are going to react to her.

Fans don’t think Clare gave anyone a fair chance and had tunnel vision for Dale from the beginning. One of her group cocktail parties was incredibly uncomfortable because she just asked the men about Dale the whole time. Watching the promo one fan said, “this is absolutely terrible and Tayshia deserves her own full season!” Another said, “that ain’t love it’s lust, good luck Clare.”

On a different post from The Bachelorette Instagram, Chris Harrison’s girlfriend Lauren Zima showed her support for Tayshia. She said, “I thought I was ready but I wasn’t ready and anyway I cried.” Lots of other users said they did too. When she came out of the limo they got emotional.

Tayshia Adams is coming into a weird situation. Chris told the men they got cheated, but a couple of them might not be able to get Clare off their mind. The men who were left after Clare found her happily ever after stayed for Adams. The men were accused of wanting to, “bro out,” with each other instead of spending time with her. They sweetly encouraged each other with the exception of a couple. Fans don’t want to see Clare in the promos anymore. They are over her and ready for Tayshia to find love.

After watching the preview for the next episode, they aren’t sure it’s going to happen with the guys left behind. It appears as though Chris is telling her new guys are coming. Rumors swirled they called some of the men they vetted as backups for Clare’s season in case any of her men tested positive for COVID. This season is unlike any other in so many ways. One fan said, “I sure hope she gets the season she deserves but unfortunately I don’t think she will just from next week’s preview.” The Bachelorette airs on Tuesday nights and there’s still a lot of episodes to come.