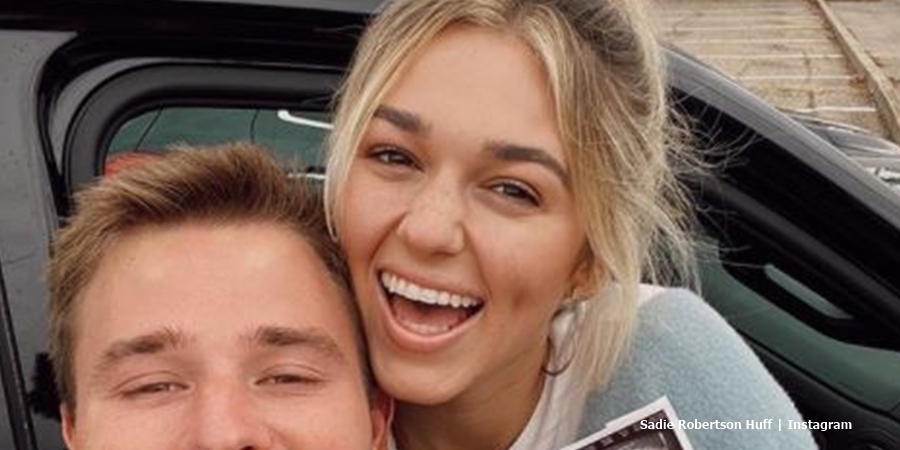 Sadie Robertson Huff, the Duck Dynasty alum revealed her pregnancy in early October. And she told her fans that the news about conceiving came “as a surprise.” Now, a month on from her announcement, she revealed the gender of her first baby with Christian.

Sadie Robertson Huff so excited about the baby

We reported that Christian Huff and Sadie married in Louisana a year ago. And, the engagement came along not long after they started dating in 2018. Duck Dynasty fans grew concerned after the pregnancy announcement, as Sadie contracted COVID-19. While she described her illness as a “wild” one, she reassured fans that the baby seemed okay. And, we reported that “her mom, Korie Robertson, and sister Bella Robertson also tested positive for COVID-19.”

Better now, Sadie Robertson Huff seems still totally excited about her baby. Bear in mind, she said that she never planned a baby just yet. And, the positive test came as a “surprise.” And certainly, she enjoys her 2020 surprise. Looking totally delighted, she now revealed that they found out the gender of their first child. Her announcement came on Instagram on the night of  November 7.

The couple celebrates a girl! Sadie’s post said, “BABY GIRL WE LOVE YOUUUU.” And, the photo she shared was filled with white and pink balloons. Plenty of fans congratulated her. And other comments also came in. One person said, “Sweet baby girl is going to have the best parents! God bless! 🙏🏻🥰.” Madison Prewitt from Bachelor Nation wrote, “So excited for you!!!!! 💕💕.”

Enthusiastic fans of Sadie Robertson Hall littered the post with hearts. One person noted, “OMG AHHH IM SO HAPPY FOR YOU TWO!!!!😱😱😱😱😱💗💗💗💗💗💗.” Then, this comment came in: “💕💕💕💕💕💕💕💕💕💕💕💕💕💕💕💕💕💕💕💕💕💕💕💕YASSSSSSSSSSS.” Actually, fans seem almost as excited about a baby girl as Sadie does. But a few Debbie Downers questioned how much the baby gender decor cost, and why they wore what looked like brand new Nikes.

People reported that Rebecca Robertson Loflin also shared about the gender reveal. In her post, she said, “It’s a girl!! Congrats @legitsadierob & @christian_huff 💕🎉 we are so excited to be adding some pink to our fam!!'”

Some fans seemed shocked that Rebecca posted the news before Sadie. One fan said, “You announced it before @legitsadierob?? ” And another one noted, “waiting for @legitsadierob to announce…but saw it here first!”

However, most fans of Sadie Robertson Hall just sent in their congratulations and happy thoughts. And, many people looked forward to following the rest of her pregnancy. Those who followed the pregnancy from the beginning who predicted a girl congratulated themselves. 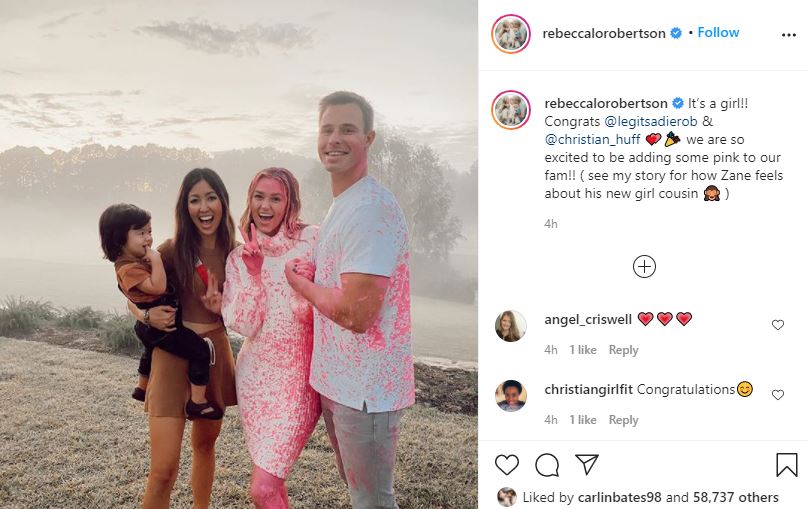 What do you think about Sadie and Christian expecting a girl? Are you over the moon for them? Sound off in the comments below.