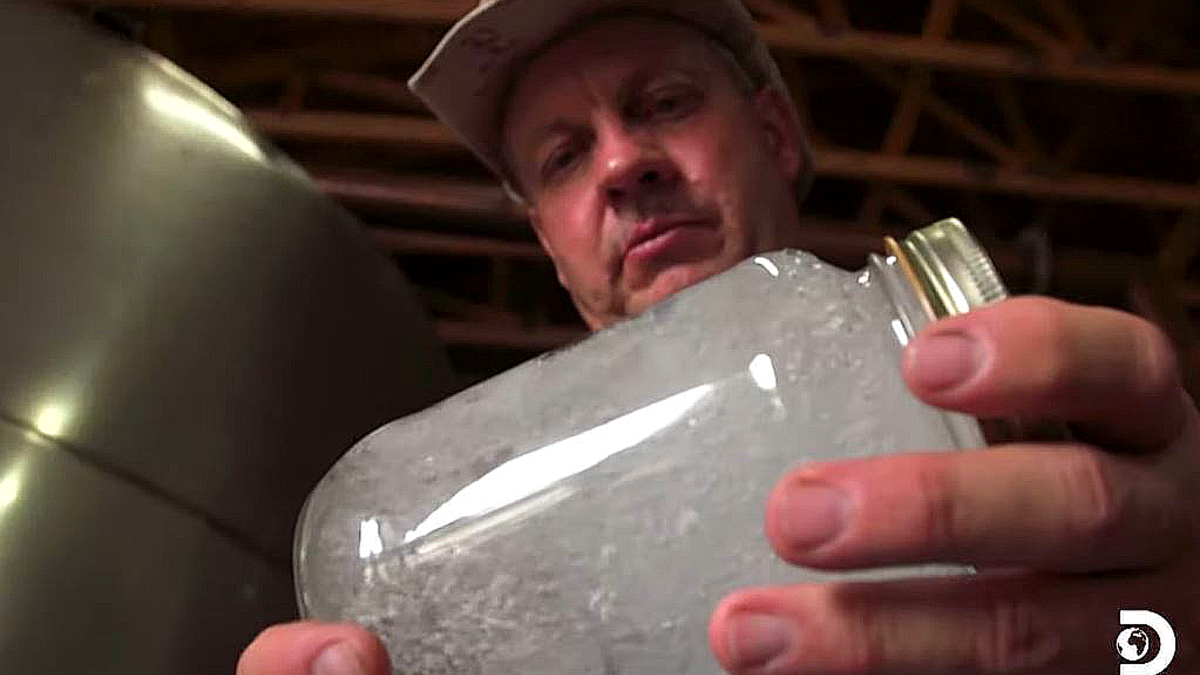 Just in time for Thanksgiving, Discovery’s Appalachian heroes are back on a new season of Moonshiners.

And don’t let the times we are living through make you think that Tickle, Tim and the boys are skint or doing without, in fact it is the opposite. These guys qualified for stimulus checks from the government!

In TV Shows Ace clip below, we see how they are thriving in these odd and troubling times.

As the network notes, times really are tough for so many and everyday life in the backwoods of Appalachia is no exception.

But for America’s favorite moonshiners, there’s more to it and their story is far from tragic.

People like to drink when times are hard, and not just for celebration. And just like their ancestors who weathered The Great Depression and World War II, the moonshiners today are seeing a huge uptick in business.

What happens this season on Moonshiners?

Just as their forefathers discovered during the aforementioned trials of the last century, outlaw shiners today are thriving in the face of adversity. While the global economy has killed and upended so many businesses around the country, the moonshine business is bursting at the seams.

When the economy took a huge nosedive at the beginning of 2020, so many businesses around the country closed,especially bars and restaurants.

The national supply chains experienced a huge demand surge and were disrupted, leading to massive quantities of surplus ingredients for backwoods shiners to produce an endless supply of high-quality liquor for very little money.

Now, with an abundance of fruits and grains and unfortunately some very distracted law enforcement, Moonshiners aren’t letting the opportunity pass them,  as this season they look to develop new recipes by building bigger stills and taking bigger risks than ever before.

Already well versed in living a socially distant lifestyle, Tim Smith, Steven Ray Tickle, Mark Ramsey, Digger Manes, Josh Owens and the rest of the Moonshiners crew are masked up and they are ready to prove that while times may be tough, the silver lining of demand in addition to a government stimulus handout is a golden ticket to a killer season of profits.

Fans know that Mark and Digger have an awesome distillery in Gatlinburg, Tennessee that retails their special blends.

In an all new season, our favorite outlaw distillers will be tested like never before as they take on more risks and beef up their backwoods businesses to meet unprecedented customer requests while taking advantage of an oversupply of raw ingredients that is a windfall to the shiners.

And as the crew explains, these hard times make the best shine, and the cash flow hum.

The new season of Moonshiners kicks off on Discovery in November with a special two-hour episode.

The executives behind Moonshiners

The new season of Moonshiner premieres Tuesday, November 24 at 8pm ET/PT on Discovery.

In addition to watching MOONSHINERS on Discovery, viewers can join the conversation on social media by using the hashtag #Moonshiners and following Discovery on Facebook, Twitter, and Instagram.

‘GH’ Rumors: Is Helena Cassadine Involved In Drew’s Captivity?
Could Hallmark, Lifetime Christmas Movies Be Canceled Due To Hollywood Strike?
‘Below Deck Med’: What Made Lexi Wilson Fire Back At Producers?
Sizzling Adam Busby Puts On Gun Show In Pink Tank & Rainbow Shorts
Another ‘Bringing Up Bates’ Courtship May Be Brewing: See Photos