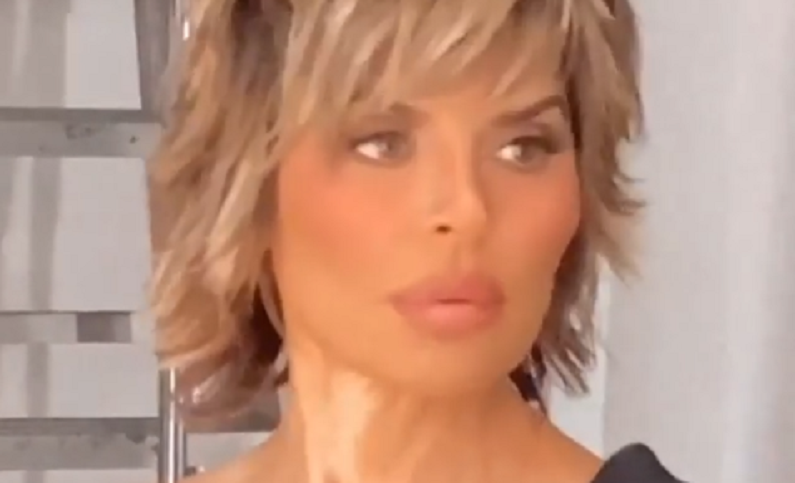 Lisa Rinna is aware that she’s a polarizing character. And she doesn’t care. Instead of hiding it, she’s flaunting it. She got a lot of flak for her behavior on Season 10 of The Real Housewives of Beverly Hills.

Now, she’s showing off her signature hairstyle and lips in a new glamorous headshot. During that time, Rinna referred to herself as an “a**hole.” She’s getting ready to launch her line of makeup and beauty products called Rinna Beauty. Recently, she’s been sharing the new photos from her ad campaign.

Rinna echoed one of the statements from her brand’s social media page to prove that she has an attitude.

On Wednesday, October 28, Lisa Rinna posted a new headshot on Instagram. Her pout is on full display. In the photo, Rinna wears a camel-colored turtleneck. She also wore a full face of makeup and nude lipstick.

“I’m just an a**hole with Iconic Hair and Big Lips,” Rinna wrote in the caption with a series of lip emojis. This very post made fans think she was the Lips on The Masked Singer. The quote is from the 2019 RHOBH episode titled “Do you really want to hurt me?” Rinna served the iconic line in her confessional, which quickly became a fan favorite.

She often uses the quote on Instagram when she’s feeling extra. Rinna is known for her fiery attitude and famous pout. So, it makes sense that she would emphasize both in her beauty line. Earlier this week, she shared a photo of herself with her lip print on a piece of paper.

In the caption, she wrote: “Pucker Up B**ch.” That post received over 8,000 likes. Some of Rinna’s fans explained how excited they are about her new beauty line. Others call her charming.

Sharing the behind the scenes process

Lisa Rinna has been giving her followers a behind the scenes look at her Rinna Beauty line. She previously shared a teaser clip from her Rinna Beauty photoshoot. Most of her RHOBH co-stars were impressed with the sexy video. Even Cindy Crawford shared her support with a series of fire emojis.

The reality star is making use of her fashion sense and signature beauty looks. Over the weekend, Rinna posted a photo of herself in a green Versace suit. The outfit showcased her legs and revealed a hint of cleavage. It’s the perfect look for her attitude.

But of course, not everyone is impressed with Rinna. While she added a new personality to the show, her latest behavior has fans wanting her off the show. Some have even called her a “mean girl” and a “bully.” They even made their thoughts known through a petition.

What are your thoughts on Lisa Rinna? Are you glad that she’s returning to RHOBH Season 11? Sound off below in the comments section.