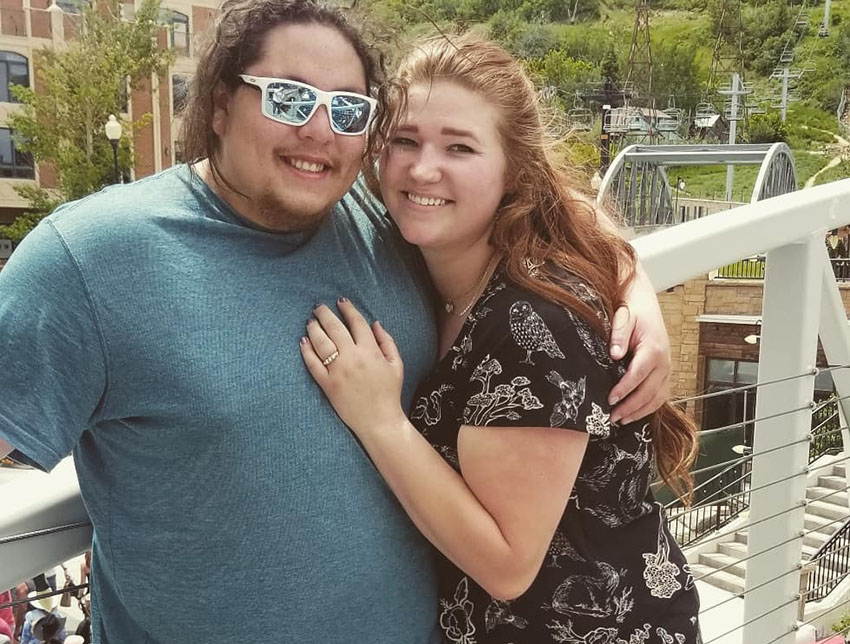 A lot is going on for Sister Wives couple, Mykelti Brown and Tony Padron. Undoubtedly due to the fame because of their reality TV family, they’re receiving a lot of criticism from followers online reports SoapDirt.

On a more exciting note is the recent announcement that the young Sister Wives couple is expecting a baby. Fans may remember Mykelti and Tony’s large wedding ceremony in December 2016. Remarkably, there were over 400 guests in attendance for the nuptials.  Intouch Weekly reports the young couple has always felt like “they were missing an important piece of the puzzle.”

Speaking of the wedding, fans may also remember the heat Tony receives online regarding his choice of wedding foods. Apparently, his desire to have tacos at the wedding causes a stir among Sister Wives followers. Luckily, once the ceremony starts, fans are in awe of the bride, Mykelti Brown Padron.

Seemingly at the edge of the seats, fans anxiously await the next announcement from the duo. For some time, fans speculate that the “big announcement” is their pregnancy. However, since that announcement, Tony drops hints at his new job. Previously, Tony worked for a bank. Now he works from home. Consequently, SoapDirt reports that his “new employer had a strict rule on discussing work on social media.”

Eventually, it comes to light that Tony quit his bank job to pursue a career as a video game streamer. Rightfully so, fans think this is a foolish move with a baby on the way. Additionally, fans seemingly blame Tony’s poor career move for being the reason why Mykelti has to travel so much. However, speculations are that he quit his bank job so that he could work from home. Consequently, this would be a solution to childcare since the couple doesn’t seem to live near family anymore.

How does Mykelti make money?

That being said, Sister Wives fans known that Mykelti sells clothes online and travels for work. Seemingly having her best interests at heart, fans are concerned that Mykelti is traveling. Why? Well, because she is traveling while pregnant. And, there is an ongoing pandemic.

All of this came to light recently, while Mykelti was doing a live online sale. Initially, viewers were ripping into her for traveling while pregnant during a pandemic. However, once a fan brings up Tony’s new career choice, they are quick to focus on that. Ultimately, this takes the heat off of Mykelti.

While fans are excited for the arrival of another Sister Wives baby, they are concerned about the choices Tony Padron is making. Do you think Tony and Mykelti have everything under control? Ultimately, only time will tell. Tune in to Sister Wives on TLC. In the meantime, stay tuned to TV Shows Ace for more Sister Wives and other reality television news.

Khloe Kardashian, Not Good Enough To Get Invited To The Met
‘Below Deck Sailing Yacht’: New Mom Alli Dore Claps Back At Trolls
Josh Duggar Files Motions To Suppress Evidence, Government Responds
‘The Witcher’: Netflix Will Not Renew For Season 3 Without Accomplishing Milestone
Natasha Parker Dishes On Worst Part Of Brendan’s Betrayal