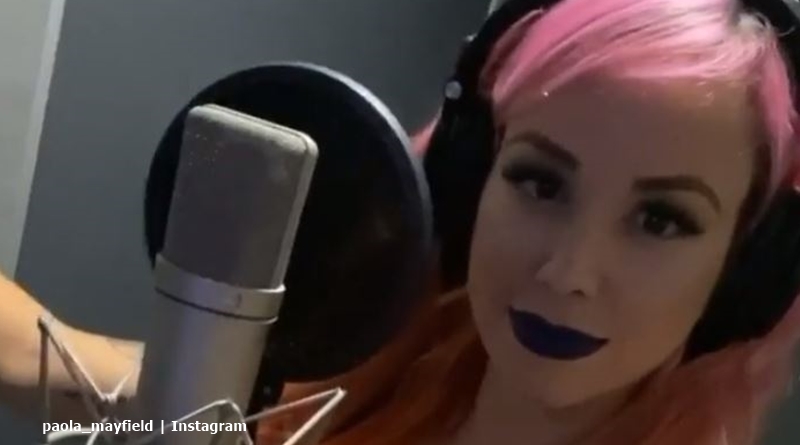 90 Day Fiance star Paola Mayfield picks up so many trolls that she often claps back at them. And, it seems a bit odd because she works hard as a physical trainer. Plus, she looks amazing with her long hair, even if it changes color now and then. And recently, she and Russ Mayfield revealed photos that hint she works on recording a song. Trolls hope it fails.

We reported in July this year, that Paolo quietly and without fanfare posted up a clip showing off her “amazing” physique. Well, she works hard at fitness, so why not? But, trolls poured onto her Instagram and slammed her and Russ for it. They alleged that Russ Mayfield is so jealous and possessive that she deliberately shares that sort of content. Of course, she’s in her 30s and people think she’s way too old. Actually, some of her trolls act as if they only just hit 11-years-old which might explain it.

Of course, “too old” shouldn’t hold anyone back from achieving their dreams. Especially, if they work hard for it. Although she claps back, they just keep on coming at her. Now, fans think she works on recording a song, as Russ posted up a photo of her in the studio. And, the 90 Day Fiance also shared a photo. On her Instagram, Annie, the wife of David Toborowksy, asked her what her song’s about, but she never replied. Maybe when it’s all done, she’ll make an announcement.

Paola works on a song, and it might be a success

Kaitlyn Bristowe dropped a song called If I’m Being Honest in May this year, Bachelor Nation reported. And, it really did well for her. So, why not Paola? Actually, Kaitlyn’s a year older than Paola and her fans celebrated her success. But for Paola, plenty of people already decided that she sucks at singing. And, few people wish her well in her new side hustle. Perhaps a slightly more mature audience watches the Bachelor shows.

90 Day Fiance trolls popped up like poison mushrooms on Paola and Russ Mayfield’s Instagram posts. Even though trolls never heard her sing a professionally recorded song, they decided they hate it already. In fact, trolls hate on her so much that Monsters and Critics wrote an article about it. They noted that she speaks her mind, and that results in backlash. Michael Jessen slammed her after she appeared on Pillow Talk.

When Paola appeared on the TLC spin-off, she commented that he only thinks of himself. Plenty of fans agreed as it revealed the scene where he insisted on a prenup. Juliana seemed confused and hurt about it. In fact, Michael’s kids Max and Cece ended up explaining the ins and outs of a prenup. But because Paola said it, people trolled on her. Including Michael Jessen.

Now, the 90 Day Fiance star might be recording a song for commercial purposes. While trolls hope she fails and flops, her loyal fans hope it works out well for her. And they think  those trolls just feel “jealous.”