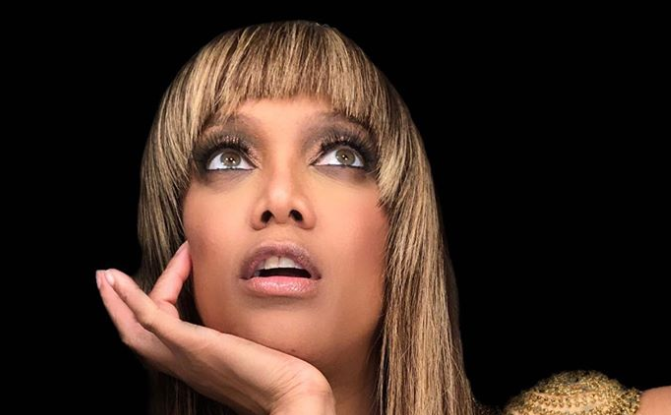 Dancing with the Stars is in full swing. Next up, the Halloween episode, which promises to be a lot of fun. Dancer costume themes revealed so far include Bride of Chucky, Psycho, and Black Swan to name just a few. Tyra Banks might just have more than one costume up her sleeve.

They’ve also said the dancers will tap into their inner villains while they compete. Of course, there are still some fans who haven’t gotten over the loss of Tom Bergeron and Erin Andrews. That made for some interesting responses to the question, what should the judges be for Halloween?

What Do Fans Think Tyra Banks Should Dress As?

Tyra Banks took a lot of the hits when the show asked fans what they thought the judges should wear. Instead of answering that question, fans took their frustration out against the model host. The post features Bruno with tiny red horns and a shiny red jacket posing as the devil.

One fan said, “Please have Tyra Banks be the invisible woman. If we never see her on the show again that would be terrific.” According to the Inquisitr another fan said, “Just get rid of Tyra Banks and they won’t need to dress up for ratings!! Please, please no more costume changes for her. The show is about the dancers, not her. We DON’T WANT TO SEE HER!”

People were really passionate about how much they don’t like Tyra Banks hosting the show. They’ve consistently criticized her from the very first promo. Some fans feel like she makes it too much about her and not the dancers. Tyra, for her part, doesn’t address the haters. She uses her social media to ask what shows on Netflix fans like and to tell them to go vote.

What Do They Think The Judges Should Be?

One fan answered the question but couldn’t help but take a dig at Tyra Banks. They said, “Derek should be Len Goodman. Bruno should be Tom Bergeron. Carrie Ann should be Erin Andrews. Tyra should be invisible & muted.” At least that way they would have the old hosts back just for an evening. Other fans had some legitimate ideas for the judges costumes. One suggestion was a panel of superheroes. Another fan said they could be the cast of The Golden Girls.

The official show’s Instagram posted some of the dancer’s costumes. Nev Schulman is channeling Black Swan. Monica Aldama is channeling Nurse Ratched. Johnny Weir is taking a bite out of his partner as Dracula. One fan said, “I feel there was a missed opportunity for Johnny to be Loki for villains night.” Fans can’t wait to see the rest of the villains revealed. DWTS airs on Monday nights on ABC.