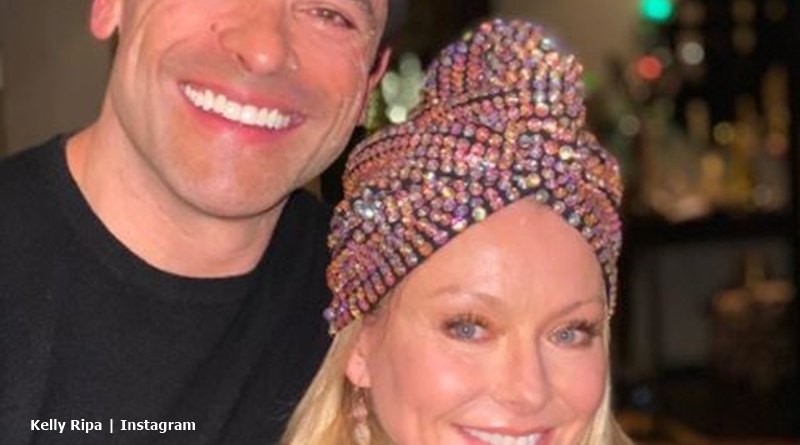 Kelly Ripa said that her family takes Halloween seriously. And, that’s no exaggeration, judging by the bunch of throwback photos she shared from years gone by. But the last photo in a series of 10, made fans wonder if the LIVE With Kelly and Ryan co-host’s “the luckiest woman in the world.”

On Thursday, October 22, Kelly Ripa took to her Instagram. There, she shared 10 photos. She captioned them with, “Halloween is a family business 🌕🧛🏼‍♂️🧝🏼‍♀️🧞‍♀️🧞‍♂️🧟‍♀️🧚🏼‍♀️☠️🎃 here are a few faves over the years.” After looking at all of them, a follower said, “You guys win Halloween 🙌🏻.” And Kelly agreed they really “mean it.” The various photos featured the kids at a variety of ages over the years. And clearly, no expense was spared. Some photos of the kids seemed very cute. But, the final photo of Mark Consuelo got fans humming.

We reported that Kelly Ripa often shares rather intimate photos of her and Mark flirting or in bed together. And, her daughter Lola hates it. It actually seems that she feels embarrassed. Well, fans of LIVE With and Kelly Ryan and Riverdale don’t mind at all. After all, Mark looks amazing. In fact, they enjoy making comments about the eye-candy. And in the Halloween photos, another opportunity came along.

In the photo that really caught the attention of fans, Mark stood on the right of the picture dressed as a law enforcement officer. Well, the eyes literally drag towards Mark’s crotch area. Mark Consuelos popped up in the comments and he said, “Full disclosure, I believe that’s definitely a shadow that’s causing that bulging effect.” Well, fans started joking about the very obvious contents of those tight pants.

Then, Mark commented again, saying, “pretty sure.” And Kelly replied, saying, “ummmmm baby are you seeing shadows?” And one follower noted, “literally had to do a double take cause I wasn’t quite sure I was seeing what I think I was seeing… 😂.”  One Kelly Ripa fan noted, “nice paunch 🙊. No disrespect 😜.”  Another person joked about the shadow, saying, “well is the shadow seeing anybody? 😂 Asking for a friend.” But several people talked about “lucky” Kelly.

One follower commented, “damn Mark you hide the whole sofa in there or is Kelly the luckiest woman in the entire whole world?” And, other impressed fans just said, “omg!” One witty person quipped. “I know where Ponch keeps his gun.”

The elephant in the room

So many fans enjoyed the photos and not just the last one that Kelly Ripa shared. One person wrote, “I love these. pictures are fantastic! Beautiful family and I’m not addressing the elephant in the room LOL☮️💜🎃.”

What did you think of the Halloween photo of Mark? Shadow or socks? Or, is Kelly Ripa the luckiest woman in the world? Sound off in the comments below.