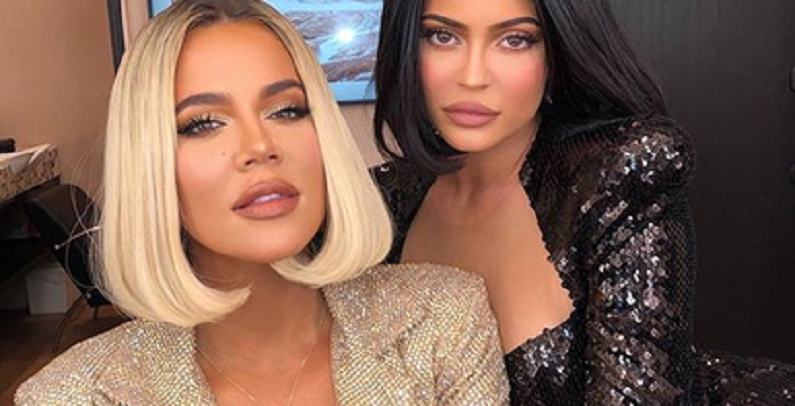 Khloe Kardashian is in shock over Kylie Jenner and Travis Scott’s photoshoot. The couple has fans wondering if they’re back together. The rapper and the reality star took part in a flirtatious Instagram post that has “absolutely shook” Kylie’s older sister. As fans know, Khloe is part of her own relationship drama.

Khloe is rumored to be back with ex-boyfriend Tristan Thompson. The co-parents quarantined with their daughter, True, earlier this year. Now, Khloe and Tristan look closer than ever. Kylie is the next in the family to have fans wondering about her relationship status with Travis.

The Keeping Up With the Kardashians star dropped two hot photos of herself with Travis Scott. In the caption, she wrote, “dress up with @matthewmwilliams @givenchyofficial this collection is wow congrats !!! can’t wait to see more.” In the photos, Travis shows off his abs as he leans up against Kylie who wears an avant-garde look.

The Kylie Cosmetics founder wears a sheer dress with black high-waisted underwear. She paired the look with a black leather exaggerated jacket, black lace gloves, white studded pumps, and a gold handbag. Fans are wondering if Kylie and Travis are back together because of this very photo shoot. These new photos shocked her fans as well as her sister Khloe Kardashian.

“ABSOLUTELY SHOOK TO MY CORE,” Khloe commented in the post.

However, it’s not clear whether the pair is romantically involved again. Travis and Kylie have remained close for the sake of their daughter, Stormi. Kylie told Harper’s BAZAAR that they’re “best friends.” The duo only wants to focus on daughter and do “what’s best for her.”

Meanwhile, Khloe Kardashian has fans talking about her appearance. Her Instagram posts are always flooded with comments about her looking different. Khloe has since gotten sick of the comments. She clapped back at fans in her most recent Instagram post.

On Thursday, October 15, she posted a photo of herself in a black and white patterned jumpsuit with a pair of nude heels. Khloe wore her hair in a high ponytail. In the caption, she remarked that she ran “out of F**ks to give.” She clapped back to the followers who left comments about her looks in previous posts.

How does Khloe usually handle that criticism?

Khloe Kardashian learned how to deal with negative comments. The 36-year-old told ELLE magazine that she now brushes them off.

“At first, [mean comments] would definitely bug me, and I’m like, what in the world?” she said in the newly published interview on Friday, October 16. “I would never take my time to shame someone or be negative. I only comment nice and positive things.”

“At first, I would let stuff like that affect me,” Khloe explained. “And now I really don’t care. Maybe if I’m having a bad day. But typically, I would say 90% of the time, it doesn’t affect me.”

Of course, there are times when the Good American founder has to “f*** with people a little bit.” While she tries her best “to behave,” she says some of her followers are “just asking for it.” Khloe also pokes fun at her appearance online. Instead, she just focuses on using social media to interact with her friends, fans, and family members.