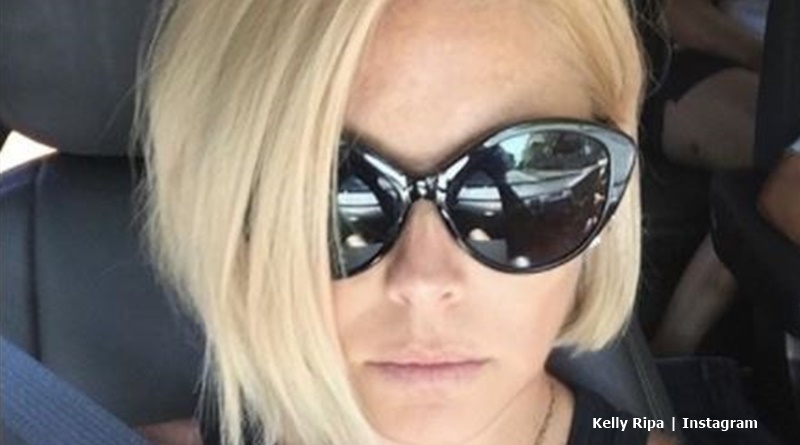 Kelly Ripa’s husband Mark Consuelos went up to Canada. There, he films for Riverdale and he expects an absence of about three months from home. COVID-19 regulations in Canada keep Kelly and Mark apart. But, they spend time together on Facetime. And clearly, Kelly keeps Mark uppermost in her mind.

Missing Mark on Wednesday, Kelly posted up on Instagram about Hump Day. Fans got an eyeful of candy as Mark lay shirtless in the bed next to Kelly. Obviously, it’s a throwback photo from before his trip up to Vancouver, Canada. While she might not physically spend time with her man, the Live! with Kelly and Ryan host, also stays in touch via FaceTime.

On October 19, Kelly revealed that they get together by using the app and share the morning coffee-time together. And on Monday, they discussed voting early. As Kelly Ripa fans know, Florida and a few other constituents braved the rain and stood in line to cast their early votes. Kelly captioned her Instagram Story with “early morning coffee with @instasuelos.” And, in front of her sat a mug that read, “I am a voter,” Meanwhile,  Mark came with a speech balloon that said, “Vote Early.”

Making up for lost time at Christmas

People reminded readers that Mark remains in Canada right through until Christmas. Recall, filming for Riverdale Season 4 resumed and they also start shooting Season 5. In the meantime back in New York City, Kelly started filming again for the Kelly and Ryan show. It looks like Mark’s really missing home at the moment and he said in a post, “about one month down and three to go” some time back.

However, the close couple looks forward to reuniting, insinuating a lot of rumpy-pumpy once the kids get out of the house. Actually, their daughter hates it when they share intimate moments on their Instagram posts. But the boys don’t seem to mind it. And, fans of Kelly Ripa certainly love it.

However, what comes to mind from the morning coffee-time on FaceTime, is the fact that when the election results come out, whichever way it goes, they won’t be together to celebrate or mourn the outcome. So sadly, they’ll be apart during one of the most historic moments in American voting history. The BBC reminds their readers that “the result of the election” usually gets “called “on the night of election day, which this year is 3 November.”

However, this year, political pundits predict some possible delays over the final outcome. One of those revolves around the many millions of mail-in votes which take time to verify and count. Plus, expect both parties to contest the outcomes. Bear in mind Al Gore ask for a recount in Florida. And it took over a month for the decision by the Supreme Court to finally find George W Bush the rightful winner. So, Mark and Kelly Ripa could remain separated during an important time in their lives.

What will Mark return home to?

It’s unlikely that these contests in court actually stretch through right until Christmas. So, for Kelly Ripa, who obviously takes voting seriously, and her husband Mark Consuelos being apart during a nail-biting time might be a bit hard on them. However, knowing Kelly and Mark, they probably get around to discussing that after their reunion in their luxurious bedroom!

Josh Duggar Preaching In Prison Might Not Work Out So Well This Time
Jarrod Schulz Wipes ‘Storage Wars’ From Instagram: Off The Show?!
‘Bachelorette’ Fans Asked, We Answer: What Does ‘Sex-Positive’ Mean?
‘Storage Wars’ Season 14: Canceled Or Renewed?!
Zach & Whitney Bates: First Photo Of Baby Jadon Free Of Tubes & Wires