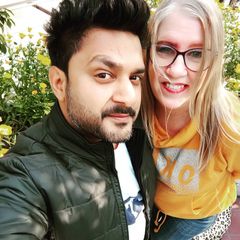 90 Day Fiance Jenny and Sumit posted a questionable picture on their shared Instagram page. Therefore fans are wondering if it means what they are thinking?

What photo are fans talking about?

Jenny Slatten and Sumit Singh have been one of the most talked-about couples on 90 Day Fiance: The Other Way. The couples have gone through a lot of ups and downs, maybe more than most couples. Despite everything, the couple seems to be going strong after 7 years. Recently, they shared a photo of the two drinking Cha tea and coffee. Not too exciting huh?, except the Shiney bands on Sumit’s finger.

Jenny and Sumit give us a big clue!

One curious, observant Instagramer also noticed the band on Sumit’s finger, as a result, decided to ask him about it. “Does Sumit have a wedding band on? I hope you two got married, the social media fan asked. Sumit/Jenny answered by simply saying, “keep it secret.” In short, makes the secret of the two getting married, one of the worse kept secrets in the 90 Day Fiance franchise!

Jenny and Sumit haven’t made it a big secret

Jenny previously shared a photo on social media where she wears a beautiful Indian garb. which fans have speculated to be an Indian wedding dress. Aside from that, Sumit has been living with Jenny for quite a while now, according to Entertainment Chronicle.

Sumit’s parents found out about their secret relationship. Jenny lived with Sumit’s parents for four months as what they thought was a friend. Jenny apparently said she was a Facebook friend and had wanted to visit the country. Eventually, Jenny’s lies backfired to her greatly as she lost all the trust of Sumit’s parents. However, Jenny did go on social media to defend herself. She stated that she didn’t lie and his parents weren’t telling the truth. She isn’t just upset with Sumit’s parents, but also with TLC too. Jenny thinks that TLC show editors, edited the show to create a bad side on Jenny and her past.

Fans continue to watch the couples Instagram for updates on their relationship, but the cast members just continues to tease fans. A few weeks ago they posted a photo of them hanging out in what appears to be a new apartment. Of course, fans asked questions and received no real answers.  It sure seems they enjoy teasing their fans with clues about their alleged marriage recently.