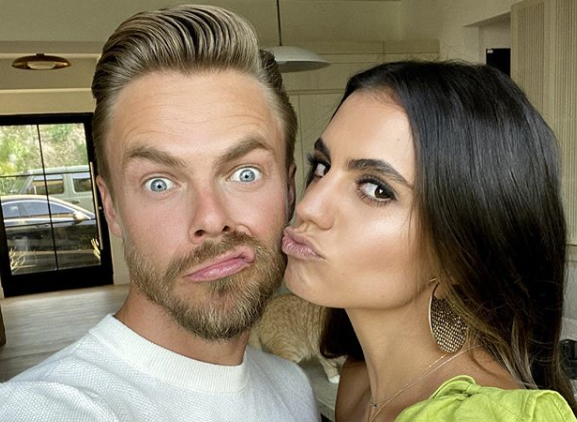 Ever since fans learned that Derek Hough planned to perform a routine with his girlfriend, Hayley Erbert, on Dancing With The Stars, rumors grew like wildfire. Will this finally be when he proposes?

After Several Years Of Dating, Will This Finally Be The Right Moment For Derek?

Hayley recently posted an Instagram video hinting that he may. A fan asks, “Are you going to propose to Hayley on DWTS next week after you dance together?”

And Derek never gives a straight answer. He seems to mull it over and then excuses himself saying, “I need to blow my nose.”

That seems pretty promising, doesn’t it? You can watch the video here:

Well okay then… 🤣🤣 Check out the link in my bio to see his answer!

But according to Derek, that’s definitely not going to happen.

“I’m just going to be straight up, that’s not happening,” the DWTS judge told ET. “Just because, that’s just not my style I don’t think, you know?”

He goes on to say that he’s opened up more about his private life, but he still doesn’t feel comfortable proposing on screen. Beforehand, he felt like he had to keep everything under wraps. But being a little more open about his relationship with Hayley has been freeing.

“It’s just tiring. It was liberating, honestly, just being like, ‘Hey, this is our relationship. This is cool. This is what it is and it’s great,'” Derek continued. “I think I just kind of got almost conditioned to feel or believe that I have to hide everything. When in reality I was just like, ‘You know what? There’s a freedom to just being open about it.'”

So What Can Fans Expect Monday Night Then?

Derek and Hayley will perform a Paso Doble to “Uccen” by Taalbi Brothers. Both are highly trained and experienced dancers, so fans have no doubt it’s going to be amazing.

“It worked out well because, obviously, we’re dancers. And my girl, she’s an extraordinary dancer. So it was a perfect excuse to be able to dance together on the show,” Derek said. “I’m just going to really just enjoy the whole experience.”

So even if Derek doesn’t propose, it’ll still be a great viewing experience. Be sure to tune in to Dancing With The Stars on ABC, Monday night at 8 PM eastern time.

But if you really want to see a sweet romantic moment, you can rewatch the magic of Sasha Farber’s proposal. He proposed to his fellow castmate, Emma Slater, back in Season 23.

If you liked this story, make sure to follow TV Shows Ace on social media. We have so many interesting stories to share with you. We hope you will stay tuned for more. Tune into Derek and Hayley’s performance and be sure to let us know what you think after it airs.