Adam and Danielle Busby of OutDaughtered were quick to split after dumping their “half a dozen girls” on Uncle Dale Mills for the night. The need for a little alone time without children became clear on Instagram in a very funny post shared by Danielle Busby.

Danielle Busby took to Instagram to share a photo of her “half a dozen girls” with Uncle Dale and Aunt Crystal Mills. Dale and Crystal’s children were also in the photo. According to the caption, Danielle and Adam Busby were quick to split. They were eager to enjoy a little time away from the girls. And, really, who could blame them? Their six girls are adorable. But, six children? Seems like a lot of work!

“Peace out ✌🏻 my half dozen girlies! 💕I love you big but Mama & Daddy are going on a #datenight !!
Mills in charge tonight! Girls are so excited for their sleepover!” Danielle penned in the caption of her Instagram post.

Both Adam and Danielle Busby took to their Instagram Stories to celebrate dumping the girls on Uncle Dale and Uncle Crystal before being quick to split.

“Later Busby kids!! Mills In charge!! Mama & Daddy going on a date night!” The celebratory snap on their Instagram stories read. The text was white on a red background with a TON of exclamation points. 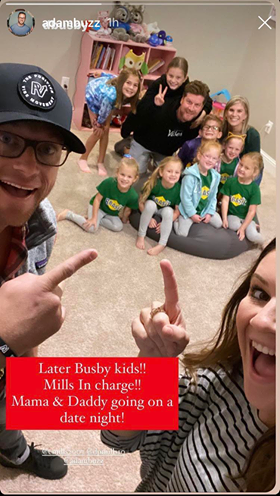 Adam and Danielle both had huge open-mouth smiles on their faces with fingers pointing back at their girls before they prepared to split.

Those who follow the Busby family on Instagram know Uncle Dale is the crazy and hilarious uncle. He’s always coming into the comment section thick with sarcastic humor. So, no one was surprised to see him in the comments of this post. After all, he was the star!

“Sleepover! I thought y’all were just going grocery shopping for an hour…” He penned in a comment shorty after the picture was shared on Instagram. Fans liked his silly comment over 300 times. While we know he was joking, certainly sounds like he wasn’t ready for Adam and Danielle to split and run!

OutDaughtered fans loved the banter in the comments of this post. Even Crystal got in on the cation. And, her comment had nearly 150 likes on it as well.

Crystal Mills added: “Who’s the BEST?!? Ha! Going to be a fun night! Hope we can get some sleep.”

With Adam and Danielle deciding to split after leaving the girls with them for the night… Crystal Mills doubts she or Uncle Dale will get any sleep tonight.

So, do you think it is great that Adam Busby and Danielle decided to split for the night? Likewise, do you think the girls will have fun with Uncle Dale and Aunt Crystal? Sound off with your thoughts in the comments!

Julie Chrisley Dishes: Who Is Her Favorite Person To Cook With?
‘You, Me & My Ex’ Coming To TLC: Here’s What We Know So Far
Kendall Jenner Flaunts Plump Booty In Barely-There Bikini Bottoms
‘LPBW’ Matt Roloff Starts Major Plans For New Home With Caryn
Adam Busby Seeks Advice On Hummer Upgrade, Wants It Bigger