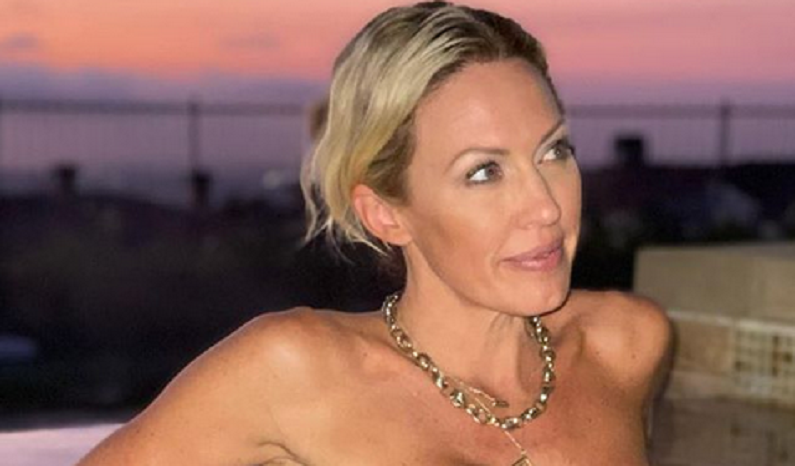 Braunwyn Windham-Burke made a powerful admission. The Real Housewives of Orange County Season 15 premiered on Wednesday night, October 14. The season opened with Shannon Beador and her new boyfriend John Jenssen. Then it showed some scenes with Kelly Dodd and her now-husband Rick Levanthal.

Next was Braunwyn and her family. She revealed that she moved into a bigger home because they needed more space. In some scenes, fans noticed that she wasn’t drinking with some of her co-stars. At the end of the season, Braunwyn made a shocking revelation.

Find out what the RHOC star said on the season premiere.

On the RHOC Season 15 premiere, Braunwyn Windham-Burke and her drinking habit was the focal point of the episode. Even some of her co-stars talked about her behavior from the previous season. Most of the ladies claimed that Braunwyn has a problem with drinking. During dinner, Emily Simpson told her husband, Shane, that she has a difficult time connecting with Braunwyn.

“She drinks so much that whenever you’re around her you can’t even have like a normal conversation,” Emily said. “If Braunwyn is always drinking the way she is, you can’t have anything but a superficial relationship with her. You can’t have a deep meaningful conversation with someone who can’t stand up.”

Kelly Dodd and Gina Kirschenheiter attended a hot yoga practice together. Kelly recalled a time when she and Braunwyn attended a party in Miami and Braunwyn was blacked out drunk. In her confessional, Kelly said that while she enjoys getting “hammered,” she feels that Braunwyn is on “a whole ‘nother level.” The episode ended with Braunwyn apologizing to Emily during an emotional conversation.

What a transformative year, tune in tomorrow at 9pm on @bravotv to see it all unfold🌺 @evolutionusa #progressnotperfection #rhoc #transformationtuesday

She even admitted that she had a difficult few months. The party in Miami was when things went horribly wrong. Braunwyn felt herself shaking, so she would keep doing shots to take the pain away. She ended up “drinking so much” that she thought she was going to die.

In the final moments of her confessional of the premiere, Braunwyn Windham-Burke looked into the RHOC camera and announced she’s an alcoholic.

“I don’t know if it’s divine intervention. I don’t know. But for the first time in my life I can say, ‘My name is Braunwyn and I’m an alcoholic,'” she revealed.

Braunwyn’s powerful admission was the perfect ending to the RHOC premiere. On Thursday, October 15, Emily shared her thoughts in an interview with E! News.

“So when she told me what it was, it took me by surprise because I had called her out many times last season on her drinking, I knew it was a problem,” the attorney said. “But she was very adamant about how it wasn’t a problem, it wasn’t an issue. She told me she didn’t have alcohol at home. So I was taken aback by the fact that she actually opened up and admitted to me that she was an alcoholic.”

Prior to her shocking admission, the 42-year-old tried the quash the beef between Kelly and Shannon. As fans remember, the ladies beefed because Kelly contacted Jim Bellino, who sued Shannon and RHOC alum Tamra Judge. Both ladies defamed Jim, and Shannon is free because a judge dismissed Jim’s lawsuit against her. However, Shannon was upset with Kelly for trying to get herself involved in the case.

Season 15 will also show the ladies dealing with the COVID-19 outbreak. The Real Housewives of Orange County airs Wednesday nights at 9 p.m. ET on Bravo.