Rumors of a Roloff pregnancy are currently swirling. Will there be a new addition to the LPBW family soon? Fortunately, Tori Roloff caught wind of the rumors. And, she’s decided to spill the truth. So, is there a Roloff pregnancy fans should get excited about? Keep reading for the truth.

Unfortunately, it looks like we don’t have a Roloff pregnancy to celebrate. Zach Roloff’s wife Tori took to her Instagram Stories just a few hours ago to shut the rumor down. She made it crystal clear she was not pregnant. And, it actually sounded like she was a little annoyed by the rumors.

I’m not pregnant. The Internet is reaching today. Don’t believe all the garbage you read on the Internet. Must be a slow news day. Or I need to work out more.”

The announcement was made meme-style on her Instagram Stories. It was a solid black background with white lettering that quickly shut down the Roloff pregnancy rumor.

But, do they want to have a third baby?

Little People, Big World fans know Zach and Tori Roloff are the parents of three-year-old Jackson and 10-month-old Lilah. The question is: do they want anymore children? Could there be a pregnancy in the future?

Earlier this month, Zach and Tori discussed their feelings on baby #3 with Us Weekly. Now, it sounds like they both are interested in having more children. But, things become a little cloudy during the discussion of when they will have more children.

Our second weekend of pumpkin season kicks off today at @rolofffarms !! Will you be there?! 🧡 #zandtpartyoffour #rolofffarms2020

Zach Roloff tells the publication he’s ready to start working on baby #3. And, it sounds as if he feels as though he’s racing a clock. Why? Well, he doesn’t want to be in his 40’s and still having children.

Tori, however, isn’t ready to have another baby. In fact, she wants to enjoy the kids they have.

She, however, did joke that if Zach could give birth to the babies she would jump right into having more.

Where did the pregnancy rumor come from?

Unfortunately, we really aren’t sure where the Roloff pregnancy rumor started. There is nothing in the comments of her recent Instagram posts to suggest fans thought Tori was pregnant. Perhaps she stumbled across a headline somewhere?

Or, perhaps she’s been getting private messages trying to confirm the rumor? Either way, she has made it clear the rumor was “garbage.” It certainly sounds like if she was pregnant, she would confirm it. Until then, fans shouldn’t believe everything they read. 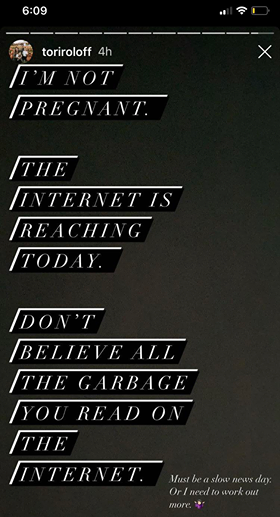 So, are you sad to know there is not a Roloff pregnancy happening? Sound off with your thoughts in the comments.